There are, what, 20,000 or so items in your average supermarket? Yet, each time you shop, maybe 40 different items end up in your trolley.  Who buys all that other stuff?

When it comes to supermarkets, I’m a speed shopper. I don’t browse, I dash through the aisles, checking off the stuff I grab against a mental list. It’s all muscle memory –  coffee on the right, biscuits on the left, skip the confectionery aisles, dogfood on the left, catfood on the right.

My other half actually looks at things.  He picks them up, reads the labels, compares one kind of curry paste against another. Thus we end up with various exotica in the pantry and, eventually the fridge (see Refrigerate After Opening, Issue 1). Even he, however, has not worked his way through the 20,000 shopping choices in our nearest Coles.

Who, for example, eats fish paste any more? I’m old enough to remember that “A little Pecks goes a long, long way” but surely the days of fish paste on Jatz at cocktail hour have long, long gone?  Maybe the local retirement home has a standing order for their Friday night happy hour. “Just the thing to go with the Yalumba Autumn Brown, Mavis.” 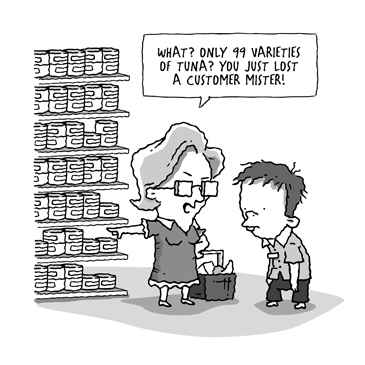 Then there’s the pickle aisle. How many different varieties of cocktail onions do you think there are? (Answer – 20.) And how long is it since you last ate one?  Remember those little fantasies-on-a-toothpick, with luridly green onion, a chunk of cheese and a bit of pineapple?  The retirement home probably still has those as well.

Canned fish is another category where I find the panoply of products staggering. Of course, now there are 101 varieties of tuna (literally), but add salmon (40 choices), sardines (17 varieties), mackerel (5), herrings (4),  anchovies, prawns, mussels, pilchards, clams, crab and oysters.

Here I have a confession to make.  We take guilty pleasure in smoked oysters. Given a very bad reputation by Bruce Spence in the movie ‘Stork’, this ugly, oily morsel was de rigeur as a cocktail nibble at my mother’s drinks parties. Your smoked oyster should be served on a cheese cracker, with a shockingly cold beverage. Call it retro, call it recalcitrant, call it plain disgusting – but they do go down well at the end of a summer afternoon.

I suppose it’s elitist to assume that, while it’s perfectly normal to buy Persian feta it’s somehow aberrant to buy tinned sausages in gravy.  The tinned sausages set are probably gawping at the tiny jar of oil soaked cheese and thinking “Imagine paying $5.70 for that!”  They whiz through the Asian foods aisle, skirting the loiterers like my husband, in their haste to get to the canned meats.

But then there’s that special product that’s become part of your life and is suddenly gone from the shelves. It only takes a couple of them to disappear to make you change supermarkets. “You don’t have Roses Lime Marmalade any more?  I’m off then.”

Some vanish forever. Right now we’re lamenting the loss of Lemon Zinger, a herbal tea from Celestial Seasonings in Boulder, Colorado. For the last fifteen years or so, we’ve started almost every day with this gently tangy beverage, or with Celestial’s more invigorating Red Zinger. Alas, both are gone, victims of a rationalisation of the health food section (are people less interested in their health, these days?)

With the rise and rise of house brands, it’s going to happen more often. Both major supermarket chains have announced that their strategy is to ‘rationalise’ their ranges, which means that the smaller brands will disappear. On paper, it makes sense. Do we really need so many choices? Or will the blanding of the supermarket offering drive people to smaller specialty shops, where they can indulge their individual preferences?

And, most importantly, will Pecks Paste survive?