A guilty pleasure
In Venice, we're part of the problem.

I probably won’t visit Venice again. It’s tough, turning my back on what was my second-favourite (after Paris) city in the world. But can I really justify adding my body to the 22 million or so other bodies visiting Venice each year? Even if I don’t carry a selfie-stick, walk around in a bikini top (not a pleasant prospect) or arrive on a multi-storey cruise liner, I am still part of the tourist horde taxing the resources of this small, precious city.

It wasn’t until we had already booked our flights that I began to read about the extent of the tourist problem in Venice. And of the Venetians’ increasing frustration with and distaste for their visitors. Granted, much of the angst is related to the monster cruise ships that churn past the entrance to the Grand Canal on their way up the Guidecca to the passenger terminal.  The boats tower over the elegant palazzi, their giant wakes lapping against fragile old walls. One such boat can discharge more than 5000 visitors – day-trippers who rush to “do” the main attractions in the minimum possible time. “Don’t go to San Marco tomorrow,” our local contact told us. “There are six cruise boats in.”

She also tried to reassure us that we were “the type of tourists Venice welcomes”, because we were staying for a week or so and taking a more leisurely approach to rediscovering the city. But that might have been because we were paying her to take us on a tour of some of Venice’s best cicchetti bars – places where you can enjoy a glass of wine (known as an “ombra”) and small tapas-like morsels to accompany your drink. As it happened, one of these bars was almost next door to our apartment in Cannaregio, a relatively peaceful residential quarter (or sestiere) of Venice. Che buona fortuna! 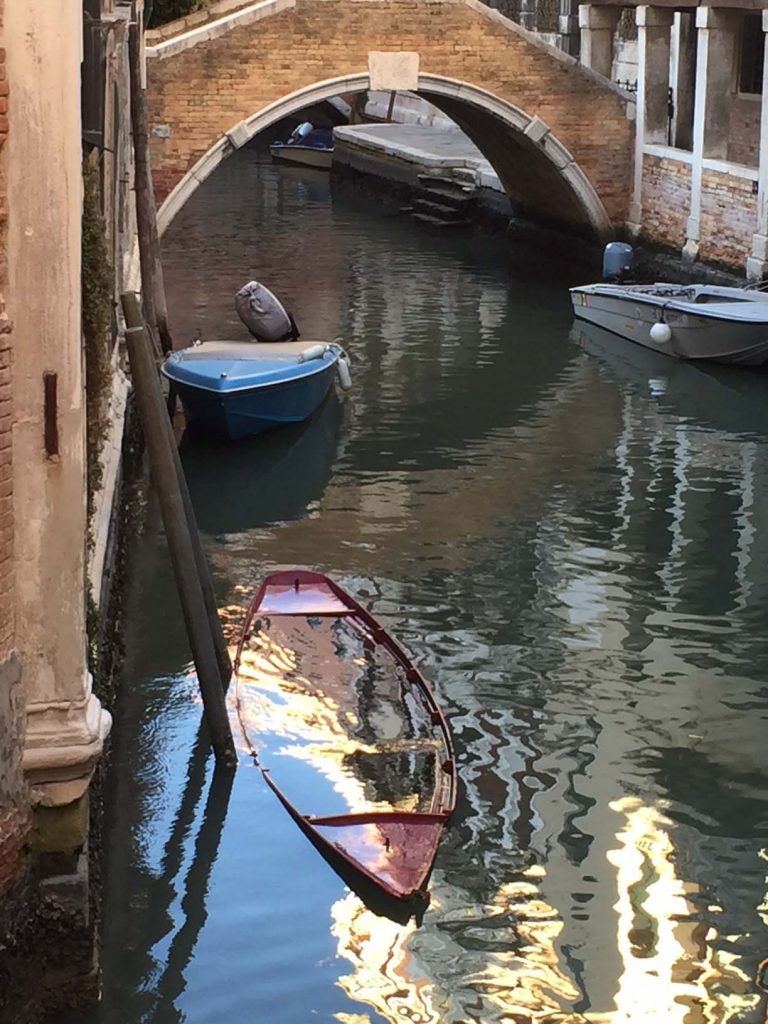 By renting an apartment, though, we were contributing to a problem that has seen the resident population of Venice shrink dramatically over the past 80 years. Because so many apartments are being converted to short-stay accommodation for tourists, housing is expensive and many of the locals are moving out. It’s a dilemma. The tourist dollars keep the city alive, but the tourists themselves are killing it.

Despite this, Venice is still a magical place.  No cars, just boats – unloading the neighbour’s new kitchen, delivering supplies to the bar, transporting firefighters and policemen, brides and corpses. Taking a wrong turn on the way to Piazza San Marco took us to the much less crowded Campo Santi Giovanni e Paolo, where we had our first Aperol Spritz and watched the local kids kick a football around in front of the vast, Gothic basilica. Formerly the major church of Venice, until Napoleon moved official worship to San Marco, it’s the burial place of 25 Doges. 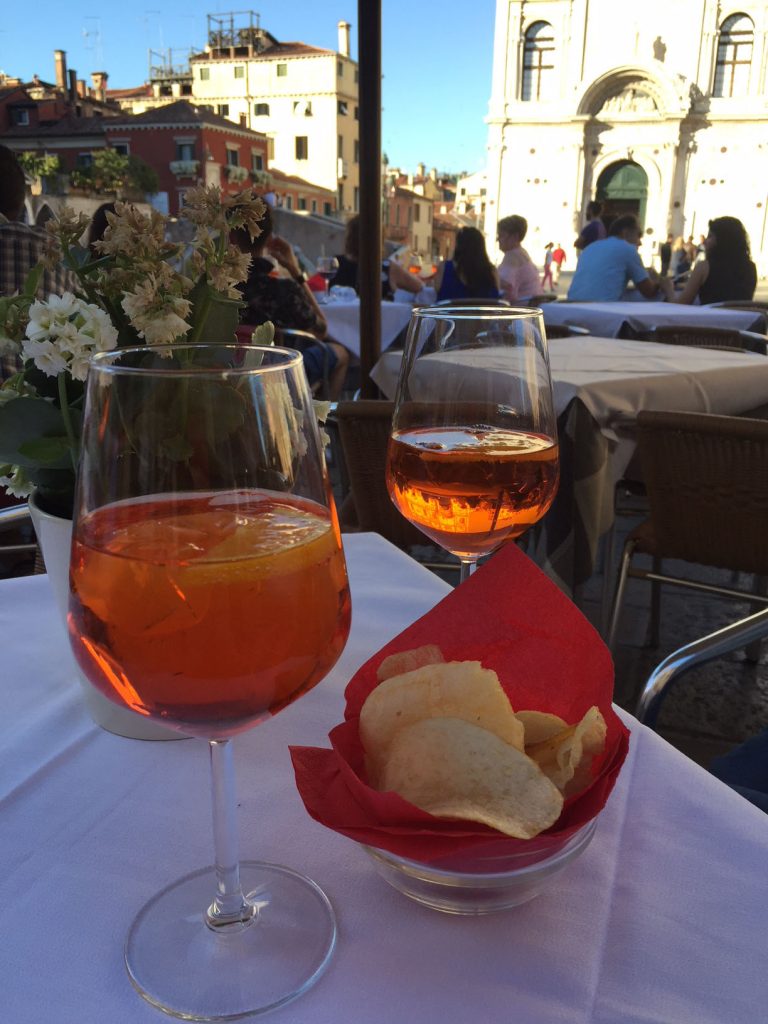 Closer to “home”, the Campo di Ghetto Nuovo was a peaceful space with barely another tourist in sight. There are trees (rare in Venice) and seats  (also rare).  Our cicchetti guide explained that this was the world’s first ghetto, drawing its name from the geti (or iron works) that occupied the area before the ghetto was established in the mid-1500s. In one of the narrow alleys leading to the square, the Panificio Volpe Davide produces exquisite breads and pastries, all strictly kosher. We tried the Impade – sweet pasties filled with almond paste – that left us happily covered in powdered sugar.

Ristorante Upapa on the south side of the Campo di Ghetto Nuovo seemed a good place to try Sarde in Saor, the marinated sardine dish that is one of the Venetian classics, and the dish of the day, risotto ‘mare e monti’ with sea bream and mushrooms. I had my Italian at the ready but, as is common in Venice, everyone there spoke English.   We went for lunch, but Upupa is open from breakfast to dinner time, seven days a week.

Speaking of dinner time, it takes some adjusting to the Italian tradition of dining late. Some restaurants don’t open until 8pm and people are still arriving at 9. We learned to fill the gap with a drink (the Veneto is home territory for Prosecco, after all) and perhaps some of those cicchetti – tiny fried croquettes or crostini topped with baccalà mantecato (creamy salt cod), roasted capsicum or anchovies. 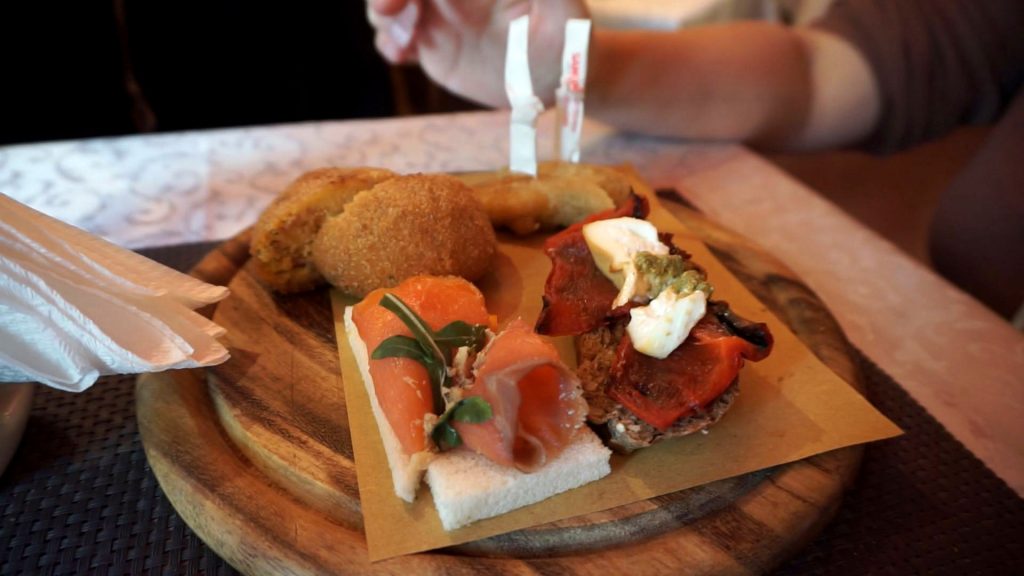 Despite dire warnings about avoiding tourist traps, we twice succumbed to the blandishments of waiters in front of the Ristorante Pizzeria Vesuvio at the busier end of our street. We weren’t there for pizza – the cognoscenti told us that wood-fired ovens are banned in Venice and to save our pizza-eating for places south. But there were local specialties on offer, including a delicious squid-ink pasta and a fritto misto di mare that would be a challenge for even the largest appetite. I’ve read bad reviews of Vesuvio on Trip Adviser but, having discarded the “wary tourists scared of being ripped-off” syndrome, we enjoyed it.  Sitting in the warm evening air, people watching and drinking a bottle of local white wine, life was indeed good.

Venice isn’t all about food, of course. Well, for us, everywhere is kind of about food, but we did do a lot of walking to counteract all those carbs. Walking was the preferred mode of transport, as a single one-way trip on the public water bus cost a hefty €7.50 per person – that’s more than $12 at the current exchange rate. A day pass was €20 (more than $32). The going rate for a gondola ride was €80 for half an hour – a kitschy tourist experience we didn’t even consider. 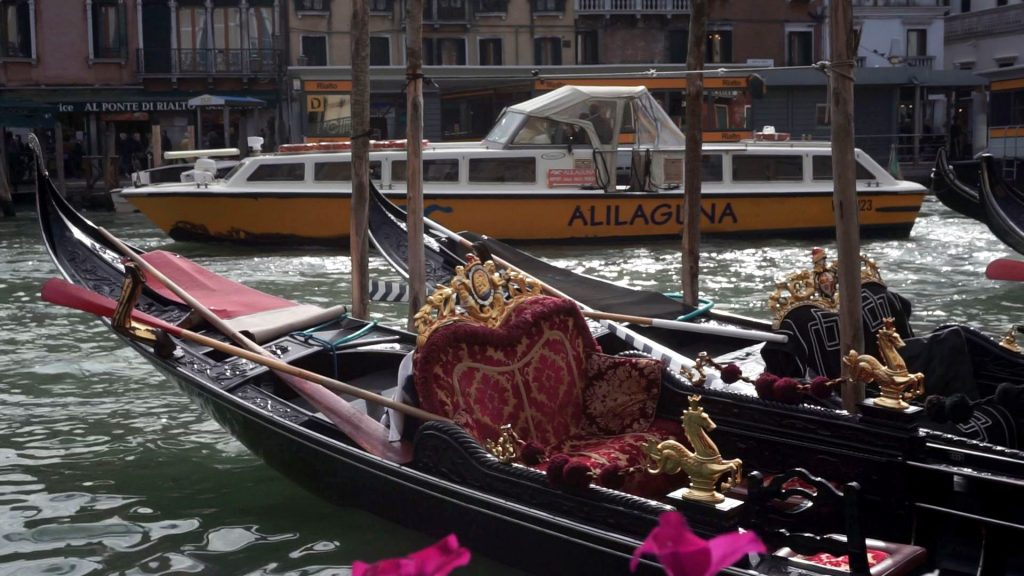 We made the obligatory excursions to Piazza San Marco and the Rialto markets, dodging through the wall-to-wall crowds. But much of the time we followed the roads less travelled, discovering bridges and canals, small squares and narrow alleyways, ancient buildings whose reflections are constantly distorted by the wakes of gondolas and water taxis, barges and pleasure boats. At the Guggenheim museum, we found a wonderful exhibition by the relatively unknown Osvaldo Licini.  And Fred explored a multi-media exhibition devoted to neo-classicist sculptor Antonio Canova.

Then there was watching re-runs of old crime series on television, because the Top Crime channel had an option to watch in English. Trying to understand the news in Italian. Finding, to our relief, that the apartment had a washing machine. Learning that the Italian word for mosquitoes was zanzare, as we bought spray to attack the local wildlife known to carry the potentially fatal West Nile Fever. Discovering a supermarket housed in an old theatre, with an astonishing array of antipasto delights. Icecream. Bread, wine and cheese on our tiny balcony. Canal-side dining in our local ‘hood at Ostaria Da Rioba. Hmmm…we’re back to food again.

We made photo books of our trip. You can see Volume 1 (Venice and Bologna) on Issuu. Just click on the cover below. 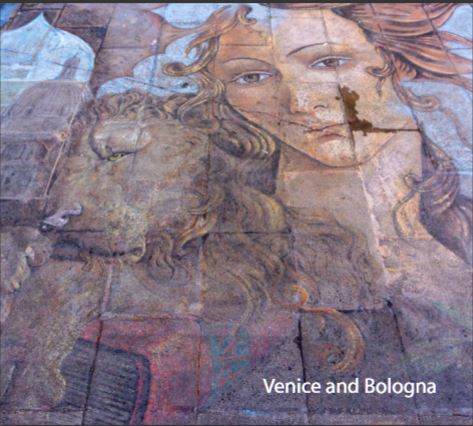