The truffle big menu
A long lunch in Catalonia

“With this menu, we want you to offer the jewel of the best home product, with a very good year and in the middle of the season, we hope you will enjoy as much as us.”

The restaurant’s words, not mine. And though the English may not be perfect, the food was. Lunch at Restaurante Can Jubany began at 3pm. And finished at 7pm. Twelve courses – thirteen, if you include the petit fours that came with coffee.

The restaurant, in Calldetenes Catalonia, has one Michelin star. It occupies an old country house in the hills about an hour’s drive north of Barcelona and was the setting chosen for a group of truffle growers, would-be growers and hangers-on to experience truffle heaven. We arrived on a sunny afternoon and left in the dark. 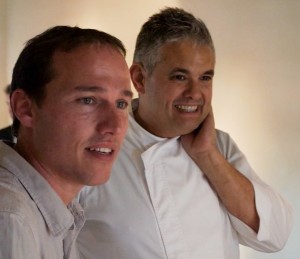 We had Marcos Morcillo to thank. His truffle tour was primarily an educational exercise, with classroom sessions and visits to growers and processors. But to truly understand the truffle, we needed to appreciate its culinary potential. Didn’t we? Of course we did.

Hence the long table from which we watched the light change and fade over the winter landscape. The bubbly sommelier. The attentive staff. The ebullient chef, Nandu Jubany, with his deft and playful way with fresh local produce.  Normally, the degustation menu is a “A stroll around Catalonia”. But in winter Jubany conjures up “The truffle big menu” – certainly one of the most memorable meals of my life.

Before the truffles made their appearance we were teased with appetisers. First, ‘Pork’s tribute: our dry sausage, crunchy pork and pork belly foam in a cone’. The description sounds mundane, but the reality was ethereal. The almost transparent, salty, crispy wafers were concentrated essence of pork. Next, olives that weren’t olives. ‘Arbequina olive in its pure state’ was a small piece of theatre, with the crisp olive shells dissolving to deliver a burst of olive oil and anchovy.

Then we settled into the real menu. The millefeuille with foie, caramelised apple and truffle was without doubt the most delicious thing I have ever eaten.

The richness of the liver, the warm oiliness of the thin pastry layers, the slightly acid, slightly sweet touch of the apples and the thick layers of black truffle slices produced a taste reaction that was close to orgasmic. It’s the kind of dish you eat as slowly as possible, never wanting the ecstasy to end.

Each of the following courses had its own surprises. And each was served on sculpted white crockery, especially designed in association with chef Jubany “with the will to get the nose closer to the food, giving the sense of smell the full importance it has in the context of a culinary experience”.

A deep bowl arrived with a slow-cooked egg, shards of truffle and Granny Smith apple, and cubes of Catalan meatball. Then the maitre d’ poured a stream of delicate onion broth over the top. As you broke the egg with your spoon, the rich yolk to flowed into the soup.

The next dish, pumpkin gnocchi with parmesan jus and truffle, garnished with wafers of crisped jamon, was another piece of molecular gastronomy. 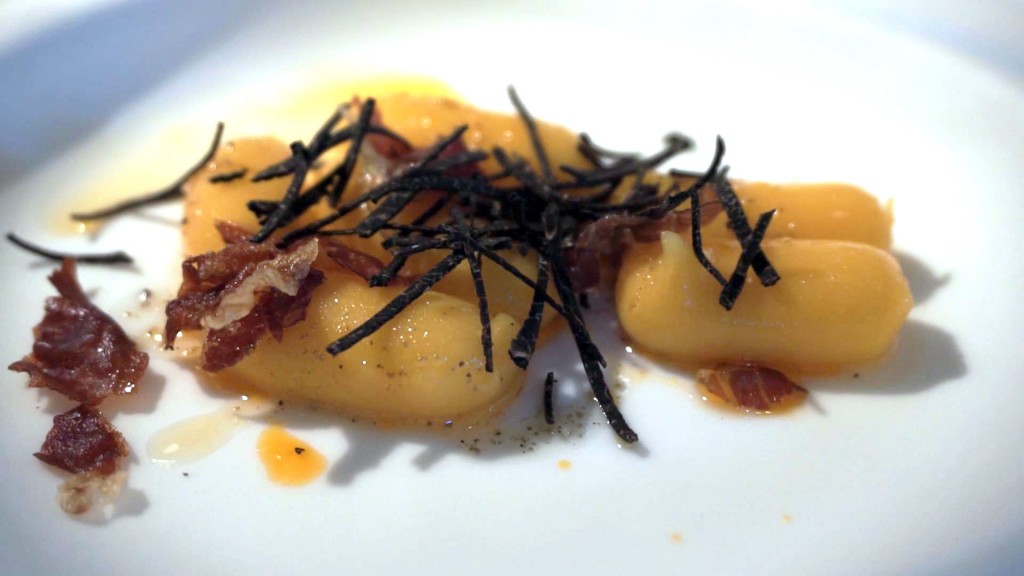 The ‘gnocchi’ were cunningly constructed capsules that that exploded in your mouth to release their intense pumpkin flavour. Many of the group voted this their favourite dish – but for me it was more about texture than taste.

Continuing the vegetable theme were Maresme peas with fragments of fatty roasted pork and truffle. These peas are a specialty product grown at Maresme, on the coast of Barcelona province. Famous for their sweetness, they have a brief season, usually in spring. Perhaps the mild winter made them available earlier than usual. Roasted chicken cannelloni and creamed truffle was luscious, but perhaps one of the less adventurous dishes on the menu.  Then came this. 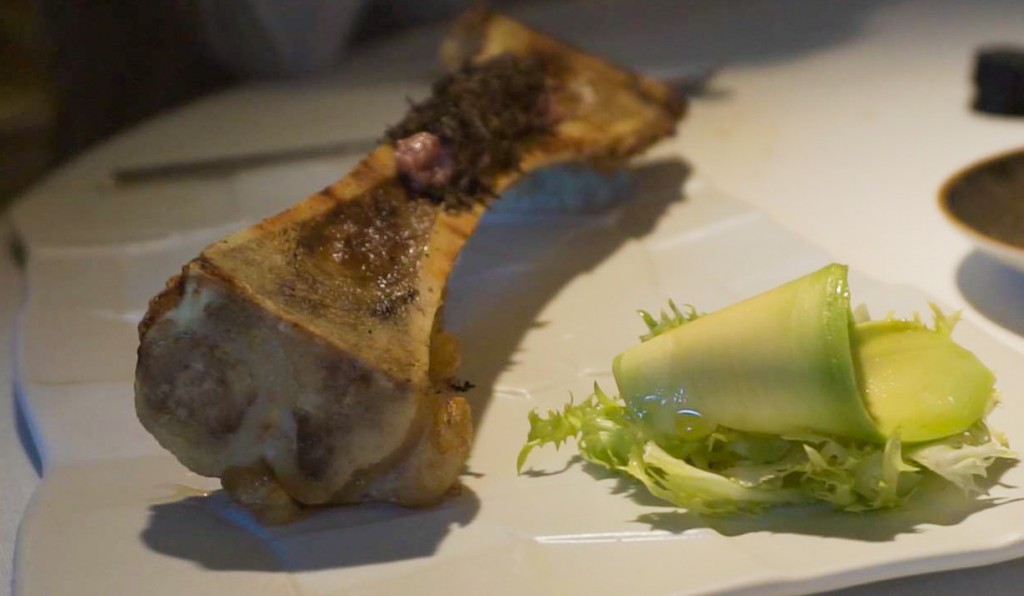 Robust and more challenging, the next course was a giant halved bone, with grilled marrow, beef tartare and truffle. Some of the more squeamish members of the group had a little trouble with this one.

The final ‘main course’  was Brussels sprouts. But this was the vegetable raised to a higher plane entirely. 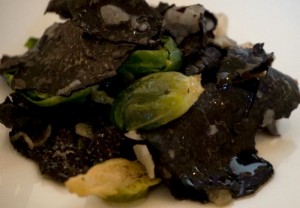 ‘Truffle a la papillote with Brussels sprouts’ consisted of shaved truffle and baby sprouts in approximately equal proportions, dressed with little gobbets of pork fat. To think I used to hate Brussels sprouts! Unfortunately, there were one or two people who could not overcome their childhood prejudices and refused this amazing dish.

The truffled Tou de Tillers raw milk cheese was unctuous, its creaminess balanced by a dollop of orange and celery jam. But we’ve had truffled cheese before, so the astonishment factor was a little lower. The cheese was followed by the first of the desserts. Intense citrus flavours in the Mandarin, Orange and Aromates sorbet cut through any lingering richness.

Then followed another theatrical masterpiece, titled ‘Let’s search for truffles’. 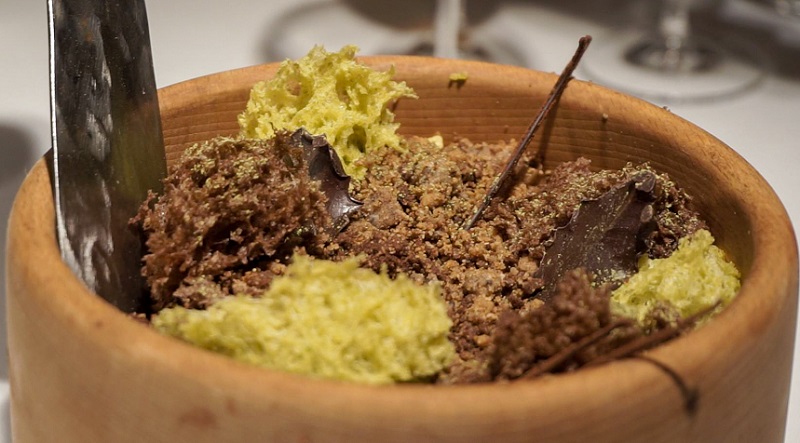 Bowls of chocolate ‘soil’ were placed on the table. Meticulously crafted leaves and twigs had all been created from white and dark chocolate. And buried deep within were, indeed, truffles. Or so it seemed. Realistic as they appeared, these too were made from chocolate. 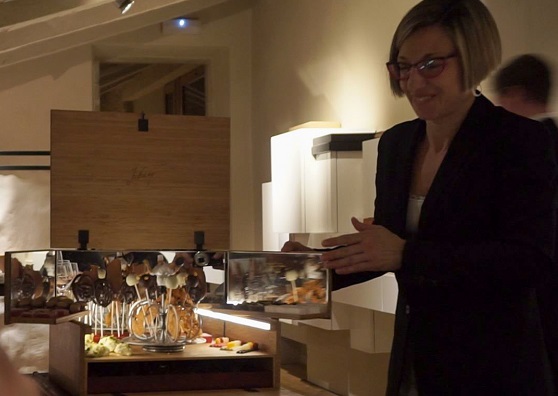 But it wasn’t over. As coffee orders were taken, our waiter brought a trolley on which sat a small, beautifully crafted cupboard. Throwing open its doors, she revealed a music box complete with tinkling tune, rotating chef centrepiece and an astonishing assortment of petit fours. Candy Lego pieces, choc-coated lollypops, fondants, jellies. Each one crafted with amazing attention to detail.

Along with the food came an education in Spanish (and Catalonian) wine. The sparkling Clos Lentiscus, Blanc de Sumoll, served with the appetisers, came from the Penedès area. This area is the home of cava, the Spanish answer to champagne. Here cava is generally made from the indigenous grape varieties Parellada, Macabeo and Xarel·lo.

However, the Clos Lentiscus was a departure from the traditional cava style. A blanc de noir, it was made from an almost extinct black grape variety, Sumoll, which is native to Catalonia. It was a sexy pinkish gold in colour, dry but with delicate hints of strawberry, toast and oak.

The next wine, La Gravera, la Pell, Saviesa 2013, came from another D.O. wine region of Catalonia, Costers del Segre. All my searching has failed to determine exactly what grape varieties were used for this distinctive white, but the producer describes them as ‘native varieties of the property, almost unique in the whole D.O.’ and calls the wine ‘a rarity’. This winery used to be an old gravel pit and has been turned into a unique vineyard. It has more than 100 years of history, but for the last five years has been growing organically and, most recently, biodynamically.

Oddly, this was followed by a Californian wine, from the Russian River Valley. The justification for the inclusion of the Torres Vineyards la Masia 2009 Pinot Noir was that the maker is Catalan, a daughter of the Torres clan that operates wineries in Catalonia and elsewhere in Spain.  I’d love to tell you that it had a violet, vanilla and liquorice nose, was perfectly piquant on the palate and peaked with potent raspberry and cherry fruit, with decent lengthy layers and fine-grained tannins. But I’d be pirating that description from someone who tried it in the USA in 2014, because my memory of the wine has faded. I do recall the liquorice note though.

The San Vicente Tempranillo 1995 that followed was served from a magnum. Here in Oz, quite a lot of wine-makers are producing Tempranillo, so it’s probably the most familiar of Spanish reds. Tempranillo is a native grape in Rioja, where this one came from, and is regarded locally as a classic food wine. The Gran Riserva Tempranillos are up there with other world-class reds and can fetch very high prices.

Then it was back to Penedès for our first sweet wine, the HMR Advent Samsó 2010. This wine was awarded a bronze medal at the Decanter World Wine Awards and is the most expensive wine made from the Samsó grape, which is also known as Carignan or Cariñena. This black grape is usually blended with others in red table wines, so our rose-coloured sweet wine was something of a curiosity. Tasting notes for this wine say: aromas of honey, apricot and spice, a wonderful creamy texture with notes of lemon drop, quince and balsamic.

And, of course, we couldn’t conclude the afternoon/evening without a sherry. The 15-year old Maestro Sierra Oloroso, from Jerez of course, has featured in a Washington Post article, lamenting the unpopularity of sherry. The Post people liked its ‘combination of dry and sweet—rich but with bright acidity and notes of bitter orange and chocolate’.  Almost predictably though, this proved the least popular wine of the day, at least for the Australian group. Perhaps that’s because we’re not accustomed to the style.

I don’t normally write about wine and I’m far from being a connoisseur. So I have to admit that I’ve cheated here, and much of this information comes courtesy of Google. My memories of each wine are now mostly indistinct. But the overall experience at Can Jubany – of exceptional wine partnering exceptional food – is one I won’t forget in a hurry.

My only regret is that I’d have to travel nearly 34,000km (there and back) to do it all again.

Disclaimer by the photographer: Although Fred contributed these pictures, he wishes to point out that he did it reluctantly as they are stills pulled from his video footage. The video is here on Vimeo