Last week I had a note from Mick Ainsworth who had happened across this old advertising sign and wanted to know whether I could supply any more information about the Penguin brand. He wrote:

“I am asking because I bought an old shop sign which is a Peters original that’s been painted over with Penguin logo and script. It’s genuinely old and a bit of a head scratcher . I doubt that it’s a fake, too obscure and I got it too cheap. It’s a forger’s master class if it’s been faked. More likely supplier changed and they just rewrote the sign. It’s big –  6ft x3ft .”

“I did a bit of research before I bought it but as a baby boomer I had never seen Penguin ice-cream in the Riverina growing up in the 60s & 70s. The sign had the hall marks of original. Uneven wear, imperial measurements, nail holes and a bracing timber imprint on the back. Its a real Peters sign originally, for sure.

The seller had it touched up a bit because the Penguin was faded but he kept the within the original out lines.The frame is recycled black butt just to stop it bending. You can fairly clearly see where it was originally nailed to a shop wall.

Its a bit of a curiosity I suppose because it represents the adaption by some shopkeeper of getting a “different ” brand & needing to advertise it without shelling out for a new sign. It may be a sign writer just copied it off the packaging. I couldn’t find where the shop was.”

This got me looking further into our ice cream history. When I worked on the Peters Ice Cream account at the Clemenger advertising agency there was a period, back in the 1970s, when we had to make two versions of every Peters Ice Cream commercial. As well as the standard ad that ran in Victoria and New South Wales, we had to make a “Penguin” version for Queensland.

I knew that, back in the early 1900s, Fred Peters expanded from his original Sydney ice cream business into other states. However, although he was a shareholder in each of the companies, the different state entities operated independently and not always harmoniously. After Fred Peters’ death in 1937 the divisions between the companies deepened, although the Peters brand remained strong.

In 1960, the Peters company in Queensland became part of Queensland United Foods, which began to market its Pauls brand nationally. Petersville in Victoria reacted to this by marketing its products in Queensland. However, QUF still owned the Peters brand in that state. Petersville was forced to adopt the brand name Penguin in the Queensland market. Some Petersville products, too, were re-named for Queensland distribution. Peters Drumstick, for example, became Penguin Tom Tom.

In 1980, Petersville and QUF resolved their differences by establishing a partnership under the name “Australian United Foods” (AUF). They manufactured and sold ice cream under the Pauls brand nationally and under the Peters brand in every state except Western Australia, where Peters remained a separate company.

The intriguing thing about Mick’s sign, however, was that he found it in Pyree, on the south coast of New South Wales. Had it migrated from Queensland?  Looking into the Penguin trade mark, I found it had been registered as early as 1944. It was removed from the register in 2001 after non-payment of renewal fees. 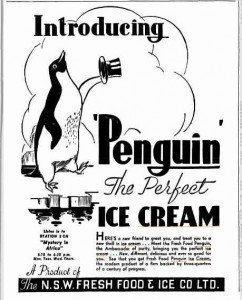 Further research revealed that Penguin Ice Cream was, in fact, launched in 1937 by the NSW Fresh Food & Ice Co. Ltd. The company was founded by Thomas Mort in 1875 and was active in the early development of refrigeration.  Thomas Mort had property on the South Coast and the company had milk depots in the Southern Tablelands, slaughtering and chilling works at Bowenfels in the Blue Mountains, a cold store at Darling and refrigerated railway vans for meat and milk.

NSW Fresh Food & Ice Co. Ltd. operated until 1952 when it was taken over by Peters Consolidated Milk Industries, which became Consolidated Milk Industries, which in turn was subsumed into Petersville Australia Limited in 1969. Thus, presumably, Petersville would come to own the trademarks which had been registered by Penguin’s original manufacturers.  When the Queensland challenge presented itself in the 1970s, it appears that Petersville simply decided to revive the Penguin name.

Given the location of Mick’s sign, it probably advertises the NSW Fresh Food & Ice Co. Ltd.’s Penguin product. Perhaps the trader had decided to switch suppliers and, some time back in the 1940s, simply painted over his old Peters Ice Cream sign to promote the more local Penguin brand. (See footnote below)

An email arrived today that casts further light on the Peters/Penguin story. It reads as follows:

“Consolidated Milk Industries Limited in 1960 with their head office at 146-148 George Street, Redfern owned Peters Ice Cream (NSW and SA) and NSW Fresh Food and Ice, amongst other companies. They marketed Peters, Penguin and Barrett’s Ice Cream brands in NSW. The Penguin brand logo by the early 1960s even featured the same stylised “P” as the Peters trade mark (as shown in photo of the Penguin sign). Peters and Penguin used the same sign-writers for the signs like you show and Malcolm McCartney a son of the chairman of Consolidated Milk and the brother of the MD of Company was the Marketing Manager of Penguin and Peters brands n the early 1960s. Interestingly Consolidated Milk Industries made a play for Streets Ice Cream in 1961 along with Kraft Foods and Unilever who eventually won the  battle.

You are right in that when either Consolidated Milk or later Petersville wanted to push into QLD they had to use brands other than Peters because of QUFs right to the brand…an anomaly of Fred Peters strategy of floating separate companies in various states.”