Food to go
Tales from the Railway Refreshment Rooms

In February 1900, the man who would become Australia’s first Prime Minister missed his train. According to Sydney’s Truth newspaper, Edmund Barton had alighted from the train at Moss Vale and nipped into the Railway Refreshment Room for a shot (or several) of whisky. Barton was a rotund gentleman whose liking for food and drink had earned him the soubriquet of ‘Toby Tosspot’.

The Truth reported that Barton was so intent on his whisky that his train moved off without him. Recognising the importance of the stranded gentleman, who was at the time engaged in the complex inter-colonial diplomacy that preceded Australia’s federation, the station master recalled the train and ‘Toby B.’ resumed his journey. The paper was not one to forego the opportunity to poke fun at a prominent politician and published the following rhyme: 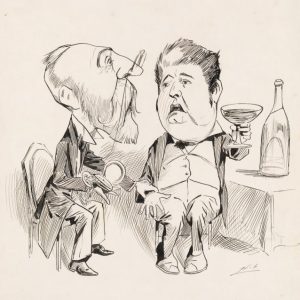 Oh Toby B., it’s risky
Thus to dally o’er the whisky
While Australian Federation on your action may depend
Somehow TRUTH has got a notion
That you should defer your lotion
Until all the diff’rent colonies in one big union blend.

It is dangerous to linger
O’er the nobbler classed “three finger”
While a nation’s generation on your services await
For such dire procrastination
Not to call it dissipation
Might result in the abortion of the coming Fed’ral State.

Railway Refreshment Rooms had been a part of Australia’s transport history since shortly after the first steam trains chugged their way between Melbourne’s Flinders Street Station and Sandridge – what is now Port Melbourne – in 1854. In 1855, the magistrates at Melbourne’s City Court granted a licence to William Peter McGirr for the first Australian RRR at Sandridge. The following year, Henry Clifford obtained a license for the one at Flinders Street.

Queensland’s first railway opened in 1865. Among the first to offer refreshments was Mrs Littleton of the Royal Hotel in Toowoomba, who operated a purpose-built establishment close to the station. Many more followed. The first RRRs in New South Wales were at Mittagong and Mount Victoria in 1873, soon followed by establishments at Sydney’s Central Station, Penrith and Singleton.

As railways expanded in all states, the refreshment rooms expanded with them. Steam engines needed regular stops to clean the firebox and take on water. It followed that passengers should be fed and watered at the same time. While there were some rooms that provided only tea and coffee to drink, most also served alcohol, leading to repeated wrangling with the temperance advocates.

In March 1881, John A. Liddelow advised the good people of Western Australia that having been successful in his application to run the Railway Refreshment Rooms he would be providing wines, beers and liquors of the best brands, along with cordials, tea, coffee, pastry and confectionery. However, by August, moves were afoot in Council to close his establishment in Perth or at least stop him from selling liquor. The Geraldton paper commented “It is to be hoped that this interference with what has been found a public convenience will not be successful”.

In 1894, the Hobart Mercury reported a move by the Women’s Christian Temperance Union in South Australia “that all the railway employees shall be total abstainers and that no intoxicating liquors shall be sold at the railway refreshment rooms.” Fortunately for the travelling public, and the employees, the Commissioners informed the union that “while appreciating its laudable efforts for the promotion of temperance, they could not agree to adopt such drastic measures.”

To cater for the needs of travellers, the refreshment rooms could trade outside the normal hours for pubs, including on Sundays. At many a railway stop townspeople took advantage of the opportunity to have a drink, even in the early hours of the morning. This continued well into the 20th century. “I remember in Toowoomba when Dulcie used to open the rooms at around 5am for the arrival of 17 down, the return of the Dirranbandi mail,” recalls a local resident. “We used to laugh as the dawn parade headed down the platform for a heartstarter.”

Sometimes the lure of the bar was just too much for passing travellers. In December 1939, troops from the Second A.I.F., en route from Sydney to Melbourne, stormed the bar at Moss Vale and began to help themselves to bottles of beer and spirits. The police had to be called to restore order. At Goulburn station, the bar was placed out of bounds.

Despite the attractions of the bar, complaints about the quality of food and drink at these establishments were legion – and persistent:

They charge you one penny per minute for a feed at the railway refreshment rooms on the Queensland lines; liquors extra. The caterers buy no poultry unless guaranteed by sellers to be over seven years old. (Telegraph, Launceston, May 1882)

It is stated that a ham sandwich has been dug out of the ruins of Pompeii in a perfect state of preservation. When tested, it was pronounced to be very similar to those to be got at the railway refreshment rooms.  (Tasmanian News, October 1889)

“Railway sausages and mash is a terrible dish to inflict on anybody’s stomach.” (The Argus, Melbourne, 1954)

Even so, some rooms were known for the quality of their food. The refreshment room at Cardwell in Queensland was noted for its fish, while in South Australia, correspondents to the Adelaide News praised the food at Gawler and complimented the management for its economy, efficiency and courtesy.

Over the years, tragic stories emerged from the nation’s railway refreshment rooms. We hear of the proprietor in Bathurst who, to the surprise of locals, cut his own throat. Or another lessee who, crossing the line at 11pm, was mown down by the passing express.

Not long after the opening of the first Melbourne line, patrons saw the demise of a young woman. As the Argus reported in 1855:

A sad loss of life occurred in the Bay on Saturday. A waterman’s boat put off from the railway pier, with a young lady named Hall, and manned by two watermen. In standing for the Storeship Una, the boat struck upon the sunken wreck of the Columbia, and immediately sunk.

Some ballast men on the beach at once put off to render assistance, and succeeded in rescuing Miss Hall and one of the men. The other waterman was drowned; and we regret also to say that Miss Hall, after exclaiming, “Oh dear,” gradually sunk, and died soon afterwards at the railway refreshment rooms.

And it wasn’t only the patrons that came to grief. In 1948, the refreshment room at Sydney’s Central Station had acquired a gleaming new mobile service unit. Attended by two uniformed women, it served passengers on the platform.  However, perhaps the unit didn’t have reliable brakes, as it veered out of control onto the line. Under the headline ‘Canteen is rail wreck’ the Sydney Sun reported:

Railway Refreshment Rooms’ new mobile canteen at Central station got out of control while being attended by two girls early today, and crashed on to lines where the Western Mail was expected. Railway employees ran to a signal-box, and the express was switched at the last minute to another platform. The canteen was wrecked, and will be out of commission for weeks. 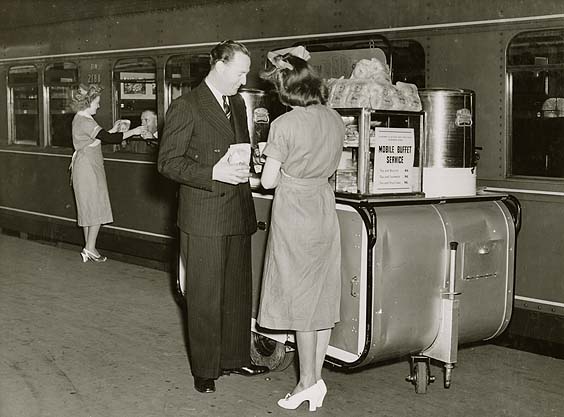 No doubt feeling it needed to boost the image of its refreshment division, in 1954 the New South Wales railways released figures to demonstrate the significance of its task in feeding the travelling millions. As the largest catering establishment in Australia, with a staff of 1500, it controlled refreshment rooms, kiosks, milk bars and even full railway accommodation at six country stations. 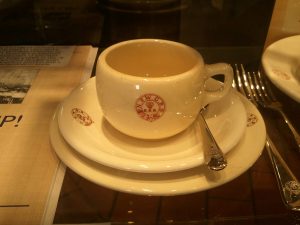 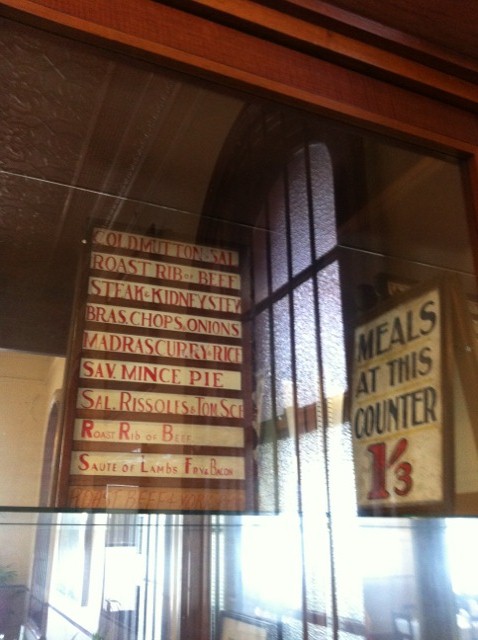 This was not to last. With the introduction of diesel engines from the 1950s, trains no longer had to make frequent, lengthy stops. With no time to enjoy a meal en route, passengers made do with buffet cars on the trains. The railway refreshment rooms, with their white tablecloths and proper crockery, became unprofitable and closed down. A few have re-emerged as cafés.

The one at Toowoomba station is still a grand affair – a reminder of the era when ladies wore gloves and hats to travel and expected to eat in style. It even displays a menu from the time when meals were just one and threepence.  Anyone for cold mutton and salad?