Four courses for $1.30
Posh dining ain't what it used to be.

We’re such culinary sophisticates now, aren’t we? We ricochet from Vietnamese to Italian, from Greek to Ethiopian food without batting an eye. And if we go out for a degustation at a top restaurant, we’re looking at around $195 a head or more, plus drinks.

But back in 1967, at the Swiss Inn in Sydney’s King’s Cross, you could enjoy “a set 4-course OYSTER and CHICKEN Dinner for $1.30, with a large bottle of Penfolds Riesling or Claret for 70 cents”. Of course, you would have already quaffed your glass of Alpine Hot Wine, which came with the compliments of the house. 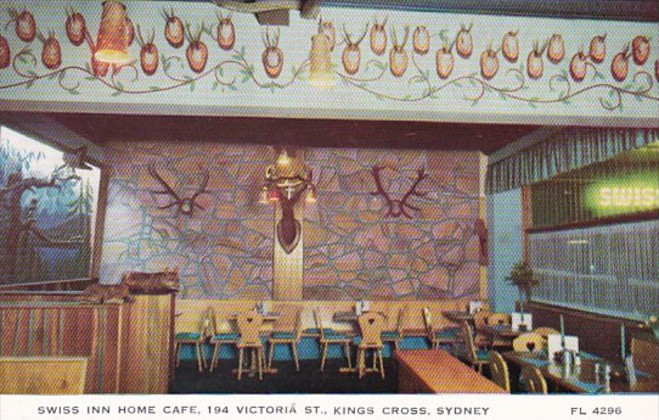 The restaurant’s newspaper advertising sought to reassure potential patrons regarding the cost of a meal. “We know lots of people are told we are one of the expensive Restaurants, because we look like one…but they are wrong” it read.  The advertisement ended by inviting readers to ring for the menu and wine list “and we will be glad to mail it to you”.  The 1960s equivalent of Zomato!

Oddly, the fixed price dinner seemed significantly cheaper in 1967 than it had been in 1964, when the Swiss Inn was promoting dinner for a couple for two guineas (that’s two pounds two shillings, or $4.20).  But the 1964 version purported to include six courses (Aperitif, Sherry or Port; Soup; Hors d’Oevre Variée; Chateaubriand; Strawberry Pompadour; Tea or Coffee).  I guess they counted the aperitif and the coffee as separate courses.  In 1964, if you chose to go à la carte, main courses were available from seven shillings and sixpence (75 cents).

Even when you allow for inflation, those prices are low. According to the Reserve Bank’s calculator, the two guinea price tag translates into  $58.93 in today’s money, while the seven and six-penny main course cost the equivalent of $10.50 today.

The Swiss Inn was run by one Joe Goddard, of whom we know almost nothing. It was clearly operating during the 1950s, when it was called the Swiss Inn Home Café. In her book A Country Childhood,  Leone Healy describes her excitement at discovering continental cuisine there:

We saved up to go to the Swiss Inn Home Café, 194 Victoria Street. It had wooden tables and chairs with a heart carved in the back rests, spot lit murals of mountain scenery and deer heads with antlers protruding from the walls. The food was a contrast to the Gardenia Café in Cowra, with its steak, eggs and chips. I ate Vienna schnitzels with continental potato salad for the first time. 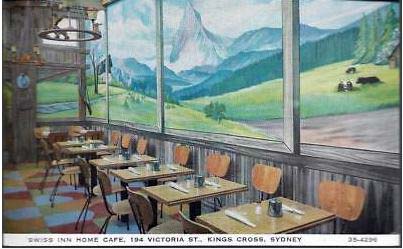 Joe Goddard also ran a Swiss Inn in Katoomba, in the Blue Mountains. Described in the advertising as the Swiss Inn Hotel, it was a re-imagining of the Clarendon Guest House which had originally opened in the 1920s. In 1964, couples who were romantically inclined were invited to enjoy a “Champagne Caviar Weekend”. For nine guineas per couple, you enjoyed all accommodation from Friday to Sunday afternoon, all meals, two nights of dancing, floor shows, two bottles of wine, two bottles of beer and a bottle of champagne.  That nine guineas would today be about $265 – good value in anyone’s language.

The dancing and floor show obviously took place in the nightclub, which was in the basement. Among the performers who appeared there was the 1960s sensation Sabrina – a blonde showgirl who was chiefly famous for the enormous size of her bosom.

The Swiss Inn name has gone, but the Clarendon has continued as a performance space. Australian actor Reg Livermore, a resident of the Blue Mountains,  launched many of his shows there and it is still a popular music venue.  The Swiss Inn in King’s Cross closed long ago and the elegant old terrace house has now been converted to swish apartments.

I don’t think there’s a lot of caviar consumed at the Katoomba guesthouse these days. Most recently renamed the Clarendon Budget, its rooms are looking pretty tired. But you can still enjoy a weekend that combines entertainment and somewhere to sleep. An accommodation package including two tickets to a show downstairs, one night’s accommodation and breakfast will set you back about $206.00. There’s no champagne included.