Higher ground
Food with a view in Spello

Picture a hillside town, where mediaeval stone overlays Roman marble. Where streets are often staircases and every archway frames a landscape worthy of an artist’s brush. This is Spello. 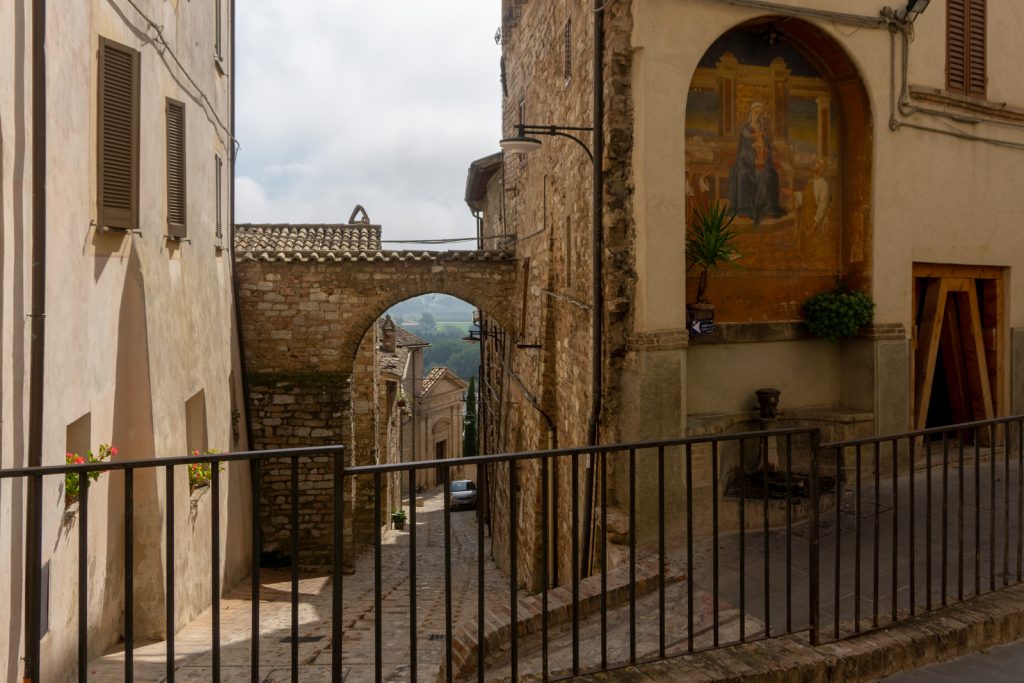 Spello is not the most famous of Umbrian towns. Assisi has St. Francis, Spoleto has its arts festival and Perugia has a university that attracts foreign students in their thousands. Spello’s more modest claim to fame involves flowers.

Each year, on the ninth Sunday after Easter, the local people create carpets of flowers in the town’s piazzas and narrow streets. The festival, known as the Infiorate, has a religious origin.  It’s the feast of Corpus Christi and the brilliant floral designs are trampled by a procession, led by the bishop carrying the communion bread (the host, or body of Christ).

For a few days surrounding the festival, Spello attracts tourists in their thousands. For the rest of the year, though, the town belongs to the locals. Yes, you can hear foreign voices in the restaurants and on the street, but mostly it’s lively, rapid, musical Italian.

We avoided the peak tourist season, arriving in Spello in early October. Not quite time for the olive harvest and months too early for black truffle, but Umbrian salumi, porchetta, game and the local strangozzi pasta know no season.  The weather was mostly kind, with gentle sunny days, picturesque mists and just one day of light rain. 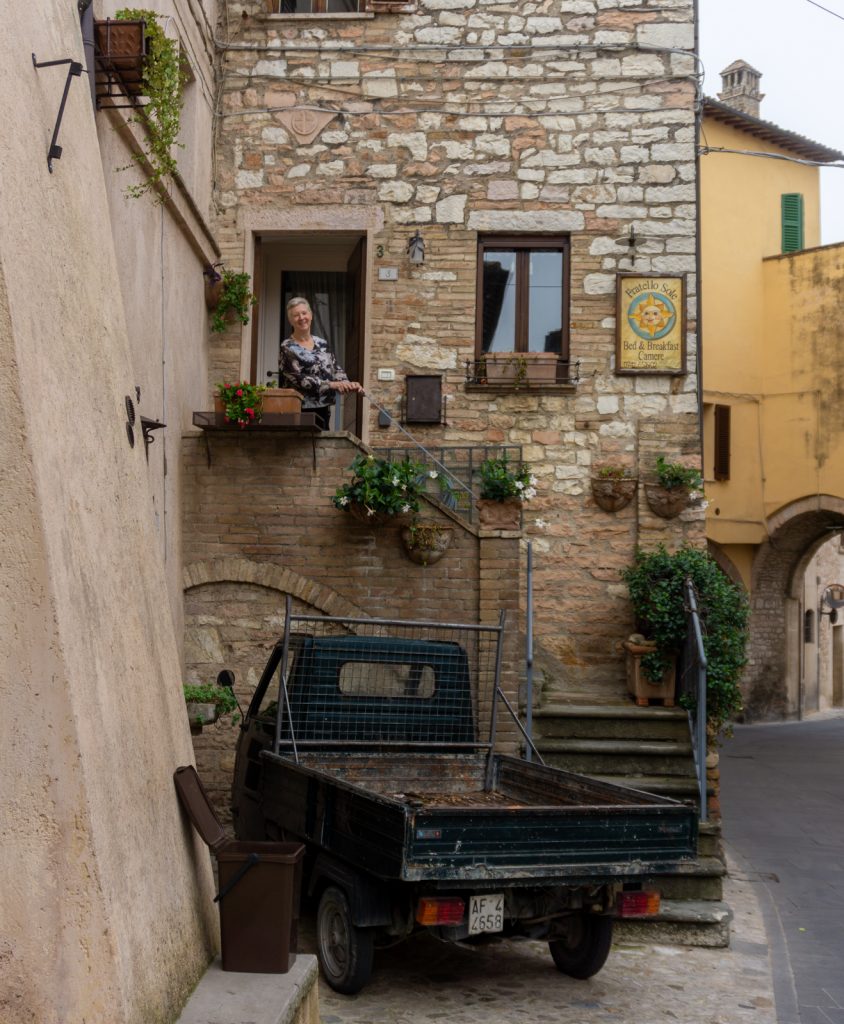 Our Airbnb host met us at the station. Stefano Antinucci is an architect and his project, as he explained to us, is the restoration of a Roman aqueduct just outside the town. The apartment was called, appropriately, Ancient Stones. It came with a map of the aqueduct walking trail, recommendations for restaurants and a bottle of very acceptable Montefalco Rosso.

We were grateful for the ride from the station. The problem with hill towns is that they are…well…hilly. Spello is situated on a spur of Mount Subiaso and the walk from the bottom of town (where the station is) to the top of town (where our apartment was) was a challenge for the legs, the butt and the lungs.  Fortunately, the central piazza, where we found most of the necessities of life (bank, bread, coffee, cheese, porchetta), was only halfway down the hill. But it was always an uphill walk to get home.

To make up for all those uphill walks, though, we were rewarded by sublime views over the Umbrian countryside. In the garden terrace of Bar Giardino Bonci we watched dusk settle over the hills to the east. Jackdaws wheeled against a darkening sky as we relaxed and sipped a Campari spritz,  only to be startled out of our plastic chairs as the bells of the church of San Lorenzo, looming above us, suddenly boomed through the evening calm. 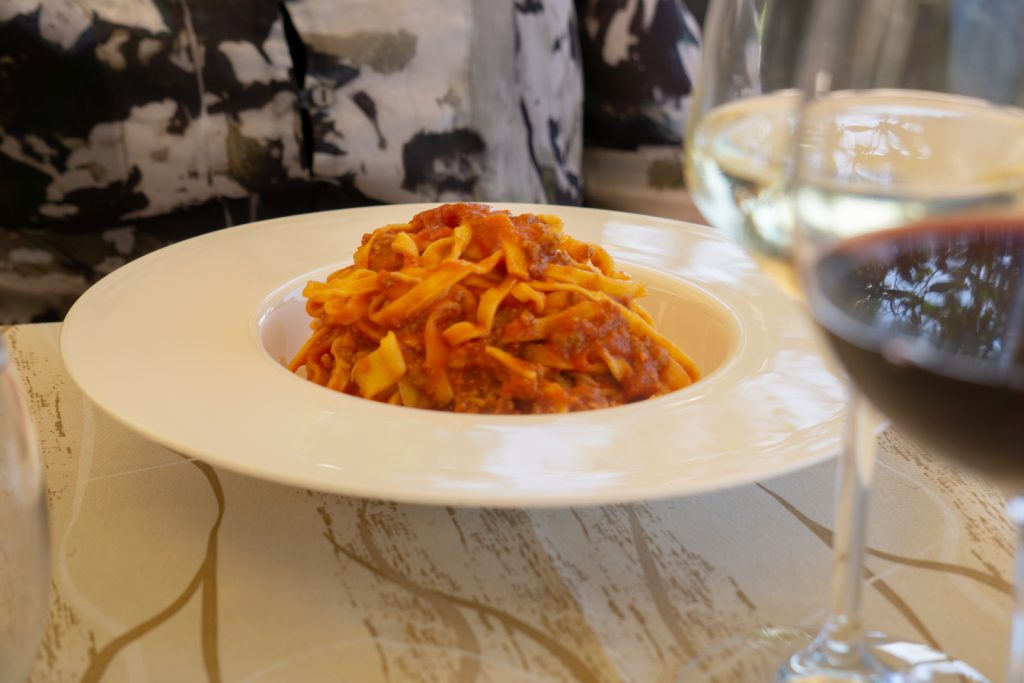 On the other side of town, we lunched on wild boar tagliatelle and gnocchetti with Sagrantino sauce on the sunny terrace of Ristorante Porta Venere. The restaurant is named for the nearby Gate of Venus, a Roman archway that dates back to the days when Augustus was Emperor, Spello was Hispellum and the nearby Via Flaminia was the main road for armies marching north. The town has two sets of walls. The Roman walls, including several ceremonial gateways, were built during the Augustan period while the mediaeval walls, built in the 14th century, expanded the area of the town.

Not every meal came with a view. In the tiny ristorante/enoteca called Drinking Wine, the pigeon was pink and perfect and the rabbit alla porchetta was redolent of fennel and rosemary. At the slightly grander Il Pinturicchio, named for Umbria’s home-grown painter, the twice-baked zucchini souffle was studded with slices of summer truffle, the veal stew was enriched with the famous Sagrantino wine from nearby Montefalco and the agnello alla moda di Spello was served in tender chunks.

In Spello, as elsewhere in Italy, people dine late. If you arrive in a restaurant before eight o’clock you’re likely to be the first people there (except, perhaps, for a gang of American tourists). The answer, of course, is to enjoy an aperitivo beforehand, where your drink comes with an assortment of nibbles: olives, pistachios, savoury pastries and the ever-present potato crisps.

Our favourite aperitivo spot was Pasticceria Gelateria Tullia, just uphill (!) from the main piazza. The terrace overlooked a small square. What it lacked in panoramic views it made up for with people-watching. Dog walkers swapped gossip, motorcycles and three-wheeled delivery vehicles (called api – bees – for their busy buzzing) competed with Mercedes and Audis for the limited number of parking spots. Smartly-dressed women (teachers?) bustled in and out of the school building to the right.  A child tagged along reluctantly behind his father, perhaps for a less-than-favourable parent/teacher encounter.

Tullia is famous for making all its ice cream and pastries on the premises and is generally agreed by the locals to have the best gelati in town. Standouts among their cakey offerings were the peschi – peaches. But not really peaches. The pink liqueur-soaked, sugar encrusted globes were heaven for the taste buds (and, no doubt, hell for the hips). 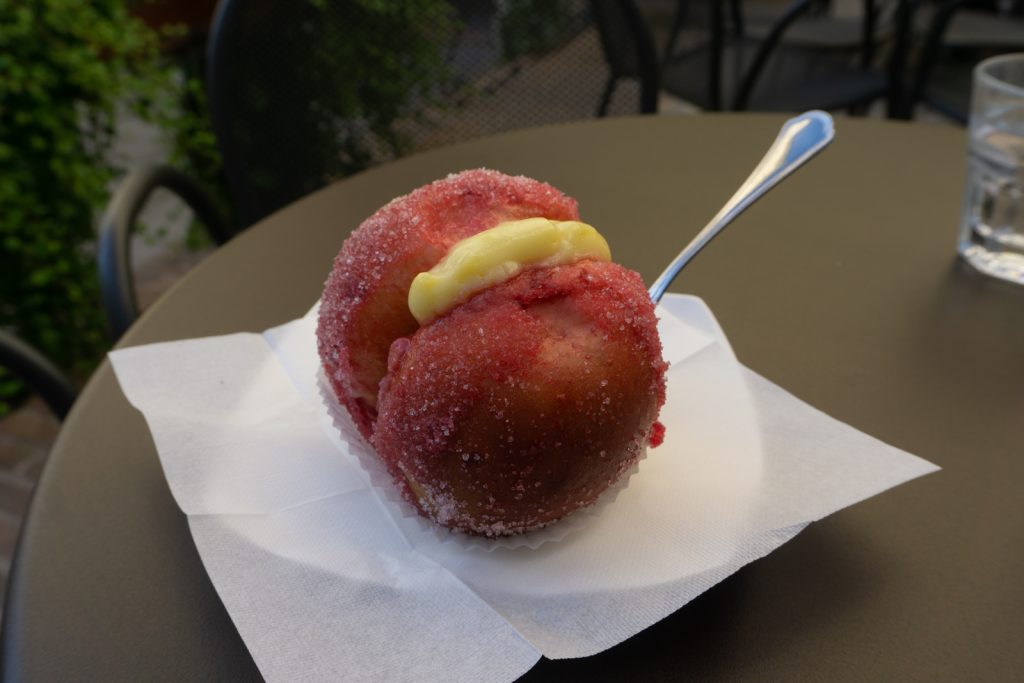 We couldn’t leave Umbria without paying a visit to Montefalco, the scene of two previous Italian getaways. More particularly, we wanted to revisit Enoteca L’Alchimista. The taxi ride there and back cost as much as the lunch, but what price can you put on nostalgia? And the food didn’t disappoint. L’Alchimista prides itself on offering seasonal menus using local produce. This time, our waiter told us, the featured ingredient was the distinctive black celery (sedano nero) of Trevi. Grown only in a small area below the nearby town of Trevi, this celery is one of around 15  IGP (Indicazione Geografica Protetta) products in Umbria and is recognised by Slow Food as worthy of protection. 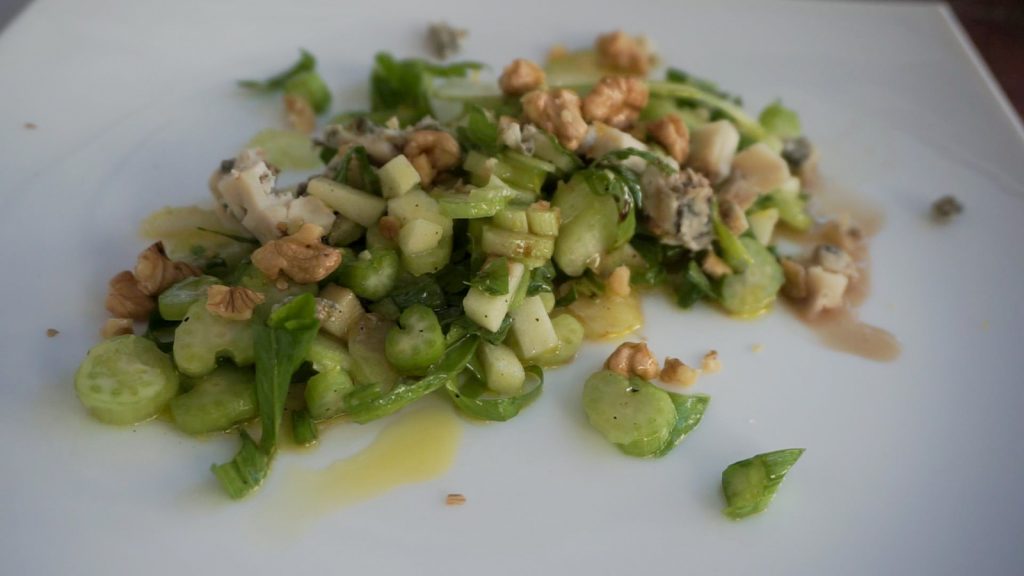 Of course, we had to have some – both as a salad with walnuts and blue cheese and as a creamy purée blanketing a handful of plump ravioli. A pot of melted scamorza cheese came with a truffle and mushroom melange and crisp toast for dipping. A plate of mixed bruschette sang with the new olive oil, and medallions of pork were draped with the famous and  (like the celery) protected red onions of Cannara.  A post-luncheon stroll around walls of the town known as the “balcony of Umbria” was certainly called for before meeting our taxi driver for the homeward journey. 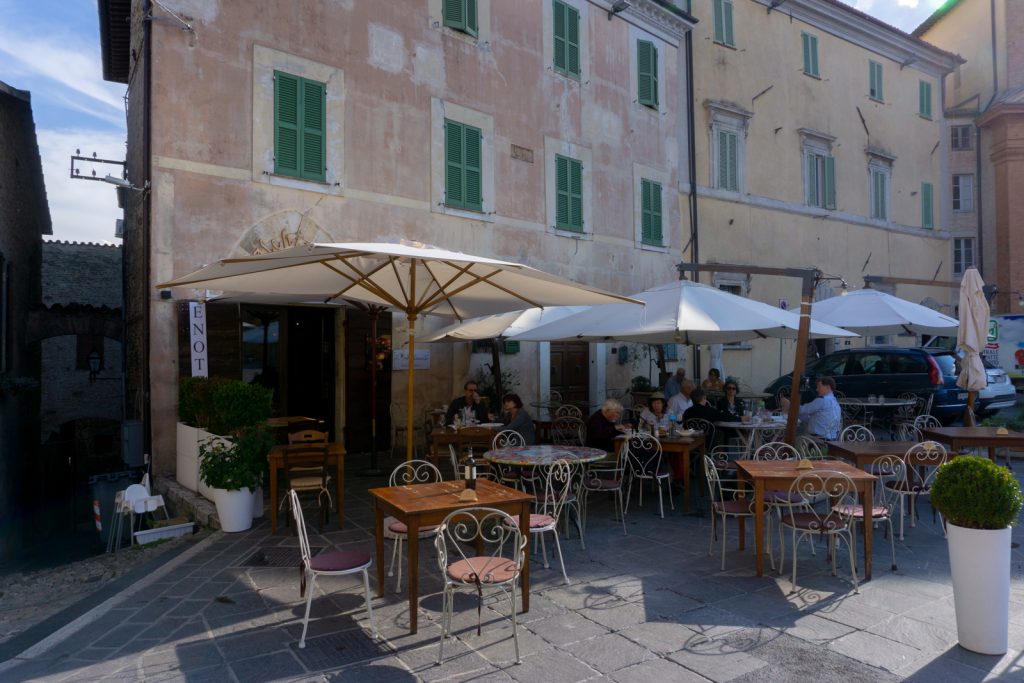 Our stay in Spello wasn’t all eating and drinking. There was a lot of walking. Down to the bottom of town, where a restaurant recommended by our host was closed but we discovered the remains of a Roman road beneath the towering Porta Consolare.  Panting climbs up narrow streets to come across yet another breath-taking view from the old walls. And, from the top of the town, the walk along the aqueduct.

This, thankfully level, trail along the hillside is about 5 km long. It follows the ancient structure that was still functioning until the middle of the 20th century. The aqueduct is walled and capped with stone, but inspection holes located at intervals let you see inside. And, surprise, surprise, the views over the olive groves to the valley and back over Spello itself are … well, I’m running out of clichés to describe them. Every so often a modern plaque set into the stone wall challenged me to translate words of wisdom from sages from Plato to Oscar Wilde. Our favourite was from Marcel Proust: it translates as “Let us leave the beautiful women to men with no imagination”. 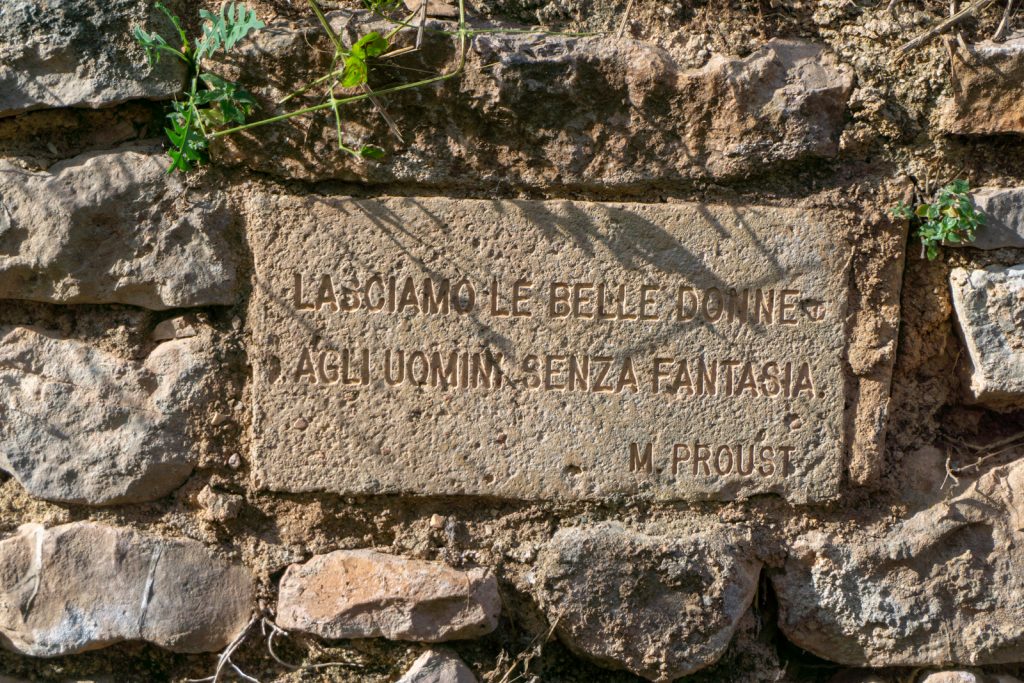 Will we return to Spello? Who knows? But if we do, there are still many more wine bars, cafés and restaurants to discover, the Roman ruins on the outskirts of down to explore and many more flavours of Bar Tullia’s ice cream to enjoy. Meanwhile, let’s hope all those other tourists stick to the well-worn track and the town retains its (relatively) unspoilt charm. Flowers and all. 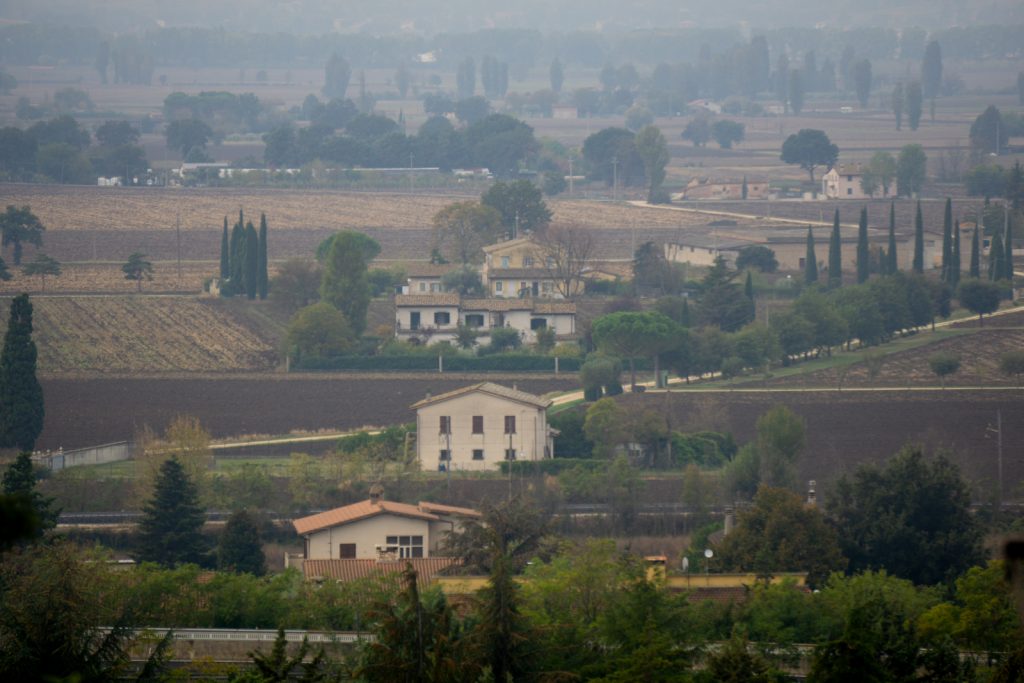