On the nose
What's that I can smell in the fridge?

Noses are big in our family. Literally. With the exception of my younger daughter, all of us can boast a prominent proboscis. My other half rejoices in an imperious aquiline nose of splendid proportions, while my own Roman-style number might have been immensely fashionable two thousand years ago. This feature, inherited from my own mother, has been passed down to my older daughter, while my step-daughter’s ambitions to be an actress were abandoned when it became apparent that her face would always be distinctive rather than film-star pretty.

There has been the occasional film star, of course, for whom a significant schnozz has been no impediment. Bob Hope quipped, “It was my mother who discovered my nose. ‘Call back the doctor,’ she cried, ‘He’s taken the baby and left the stork!'”  Barbra Streisand has never been afraid to be photographed in profile and refused to have her nose ‘fixed’.” I didn’t trust the doctors to make my nose right,” she once told a journalist. “I thought my nose went with my face… it’s all rather odd”.

Nose size, however, has absolutely no relationship to the acuteness of your sense of smell, so those of us with large ones are not necessarily qualified to be a professional ‘nose’ –  a perfumier, say, or a wine judge. The sense of smell relies on five or six million receptor cells high up in our nasal passages, covering an area about the size of a postage stamp. Although this is good enough to let us detect some substances in dilutions of less than one part in several billion parts of air, compared to dogs we’re sensorily deprived; they have from 150 million to 300 million receptor cells and about 40 times more brain area allocated to deciphering smells. Which is just one reason why it’s better to use a dog for finding truffles than to get down on your knees and try sniffing them out yourself.

While women are generally more sensitive to smells than men, this situation is reversed in my family. The ageing process seems to have affected my olfactory senses much more than they have his. Since we own three dogs, all of whom are intermittently aromatic, this is sometimes a blessing. However, at other times I do feel as though I’m missing something.

People who lose their sense of smell entirely (a condition known as asnomia) report feeling bereft, not to mention in danger from leaking gas and undetected burning objects. The condition is particularly distressing when it comes to food, since most of what we call taste is really smell. One sufferer has written poignantly: “As I passed by my favorite fruits, vegetables, cheeses, or treats in the grocery store, I’d feel my usual surge of desire replaced by a jolt of frustration”.

Some of us are unable to detect specific smells. Take asparagus, for example. It had always been thought that, in some people, the distinctive odour that earned the vegetable the title of the “chambermaid’s curse” did not occur. Wrong. Scientists showed that everyone produced smelly urine, but some people just couldn’t smell it. The same variation in sensitivity apparently goes for cyanide, as any detective story addict could readily inform you.

Despite my declining olfactory abilities, during last year’s truffle season I had absolutely no difficulty in detecting the presence of this highly aromatic fungus. In fact, because my husband was providing something of a truffle delivery service for restaurants participating in the Capital Region Truffle Festival, our whole house had the funky, earthy atmosphere of an oak forest in Perigord. And when you opened the fridge it felt like something was alive in there, ready to leap out and grab you by the throat.

The aroma of truffles is, well, penetrating. So, for a couple of months, we had truffle eggs, truffle butter, truffle chicken, truffle sausages – in fact, truffle everything-that’s-kept-in-the-fridge. I’m not complaining, mind. If my daughters ever produce grandchildren who say to me “What a big nose you have Grandma”, I’ll be happy to reply, unscientifically “All the better to smell the truffles with, my dear”.

This article was intended for inclusion in Regional Food Magazine, but unfortunately the proposed “truffle edition” never happened. 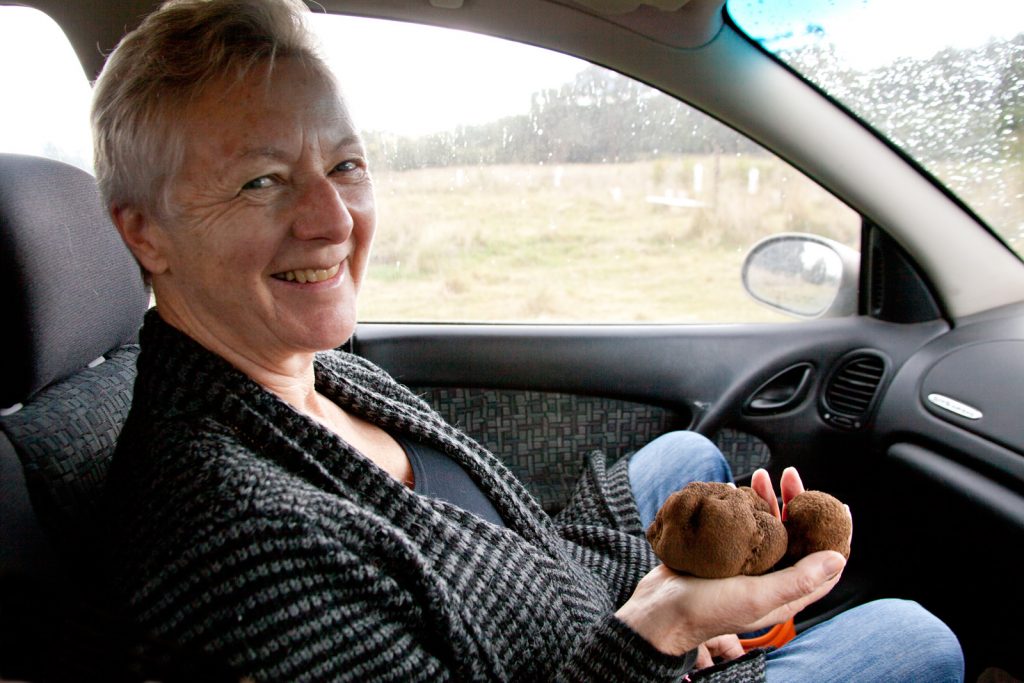