The other Italy
Slowing down in Lecce

It wasn’t until we were leaving Lecce that we came to understand two important things about Puglia. On the train, we got talking to an Iranian. He was doing a PhD in agronomy at the University of Tuscia in Viterbo, north of Rome, and had been studying the olive groves of the Salento Peninsula in the very south of the region – the ‘tacco’ or heel of Italy’s boot.

The first thing we learned was that the olive oil industry, of critical importance to Puglia, is under severe threat. In our travels around the area, we had seen many dead or dying olive trees, their branches leafless above the ancient gnarled trunks. “The cause of the problem is bacteria passed along by bugs,” our new acquaintance told us. “It came from Costa Rica where it infects citrus trees.” 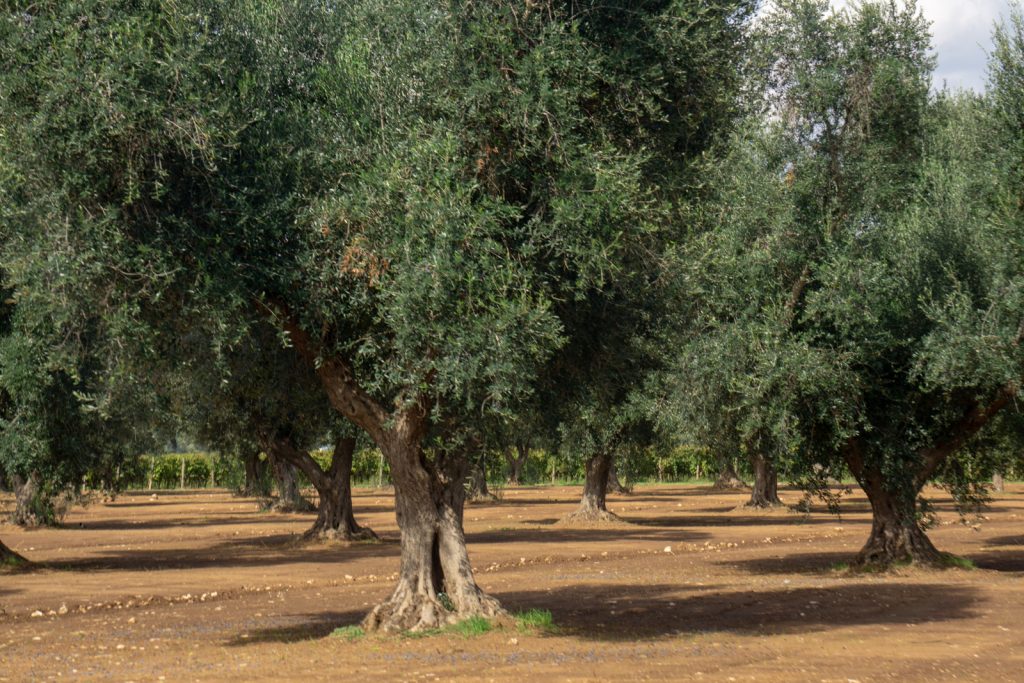 Since Puglia produces around 40 per cent of Italy’s olive oil, the problem is serious.  You’d think the scientists and the olive growers would cooperate in finding a solution but, this being Italy, it’s not so easy. When the scientists declared that infected trees and those nearby needed to be uprooted and destroyed, many farmers refused. To them, it meant destroying their heritage. Things got emotional. The scientists were accused of introducing the disease, or of conspiring with land developers to get rid of the farmers.

Things have simmered down but, as yet, no consensus has been reached on how to tackle the blight, which is steadily creeping north. Resistant species of olive may offer some hope, but that won’t protect the existing trees, some of which are hundreds of years old. “There are no easy answers,” the Iranian said.

Changing the subject, he began to tell us of his love for the people of the area. In Puglia, he explained, he always felt welcome. In Viterbo, on the other hand, he had been asked to leave bars, told “You’re not wanted here”. And, apparently, the Viterbesi were not just racist, but extremely parochial. He told us of women in long-term relationships with men who refused to marry them because, although Italian, they were not from Viterbo. “The people of the south are not like that,” he told us. “They are warm and generous.” That was the second thing we learned. 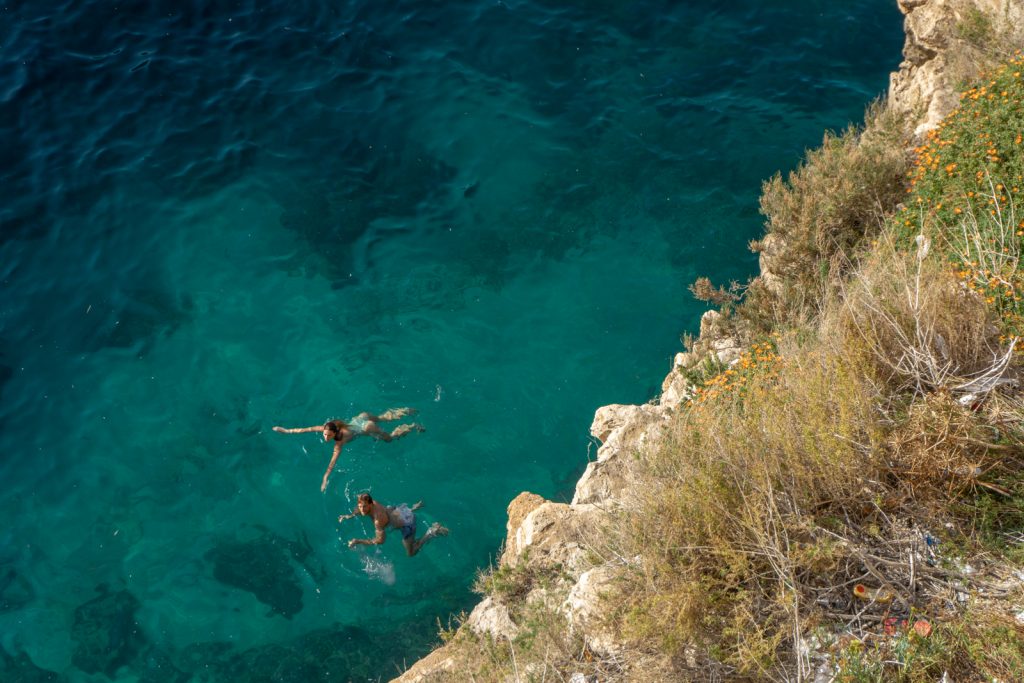 The south was certainly warmer. Although it was late October when we visited, people were still swimming from the beaches in Otranto, Gallipoli and Poligno sul Mare. In Lecce, where we were based, the region’s unique honey-coloured limestone amplified the heat of the autumn sun. At six o’clock in the evening, as the sun descended, shuttered doorways opened and empty streets became busy restaurant strips – one, unfortunately, directly below our apartment.

In contrast to the severe stone of Spello, Lecce’s churches and public buildings glory in excess. And there are churches everywhere. The intricately detailed baroque style dates back to the 15th century when the city was under Spanish rule. The explanation lies in that local stone. Comparatively soft and easy to carve, it inspired artisans of the period to create the elaborately decorated facades that greet you at every turn. 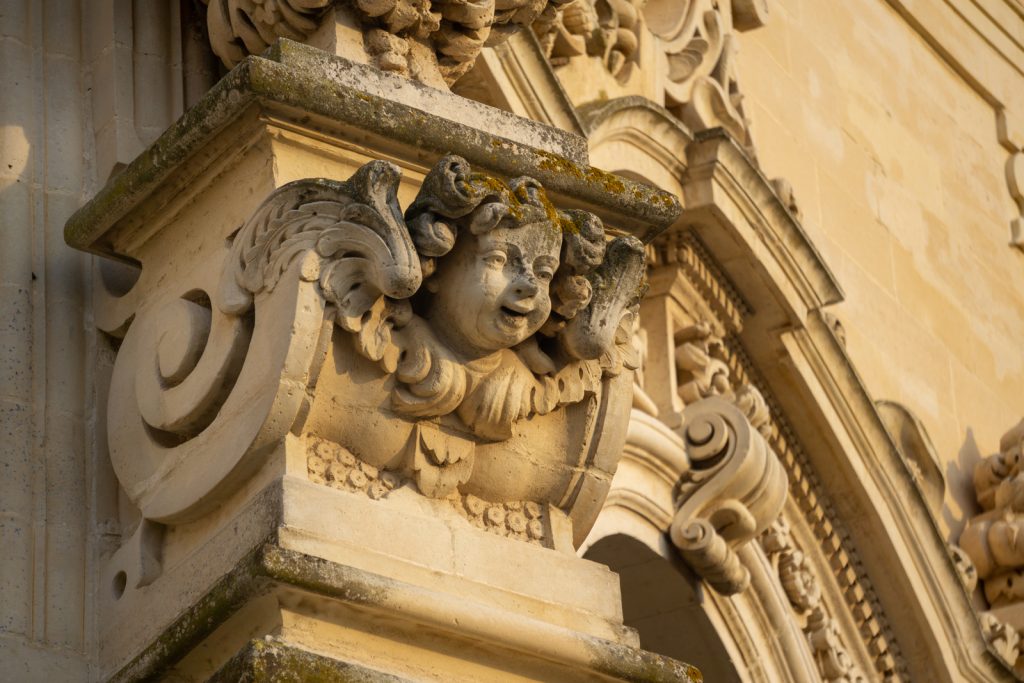 Our first apartment was opposite the comparatively austere Greek church. When a combination of noisy plumbing and an almost impossible-to-negotiate staircase drove us to seek new accommodation, we were within touching distance of the Chiesa di San Matteo.  From our roof-top terrace, we watched a nervous bridegroom pacing in the piazza below, an impatient flower-girl hopping from foot to foot, the violinist arriving on his motorbike and, at last, the bride arriving in a froth of white. We woke to bells from the church’s campanile and said good morning to the jackdaws who made the upper reaches of San Matteo their home. 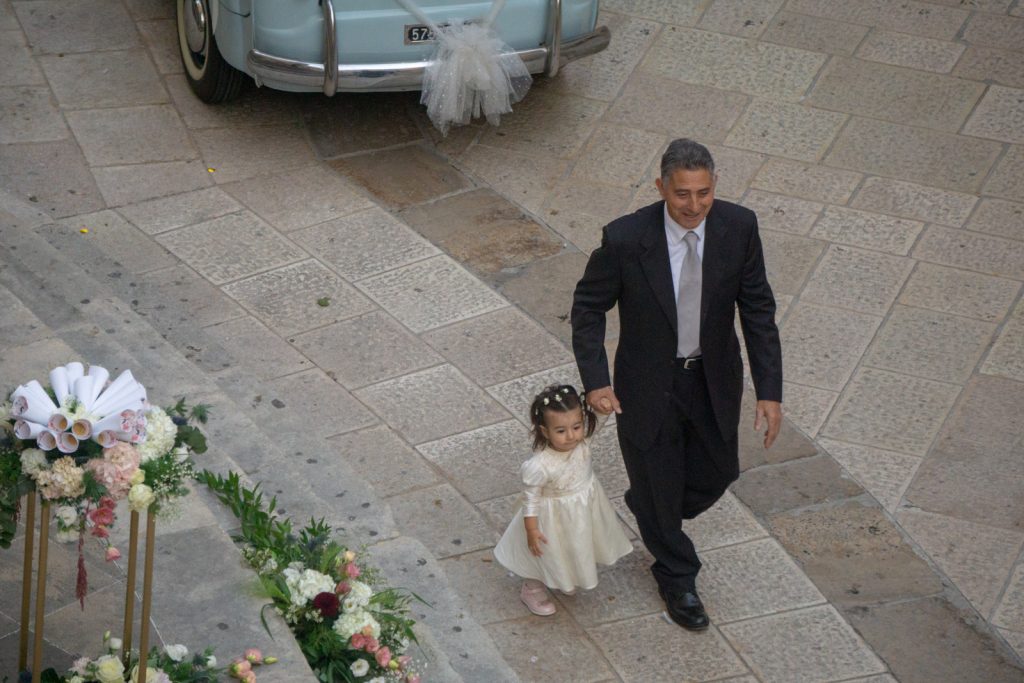 The climate provoked a certain torpor. We were slow to start the day, despite breakfast borne up the many flights of stairs by an obliging African called Wisdom. An afternoon snooze generally followed a picnic lunch on the terrace. With the luxury of a week in one place, we could wander rather than following a tourist to-do list. 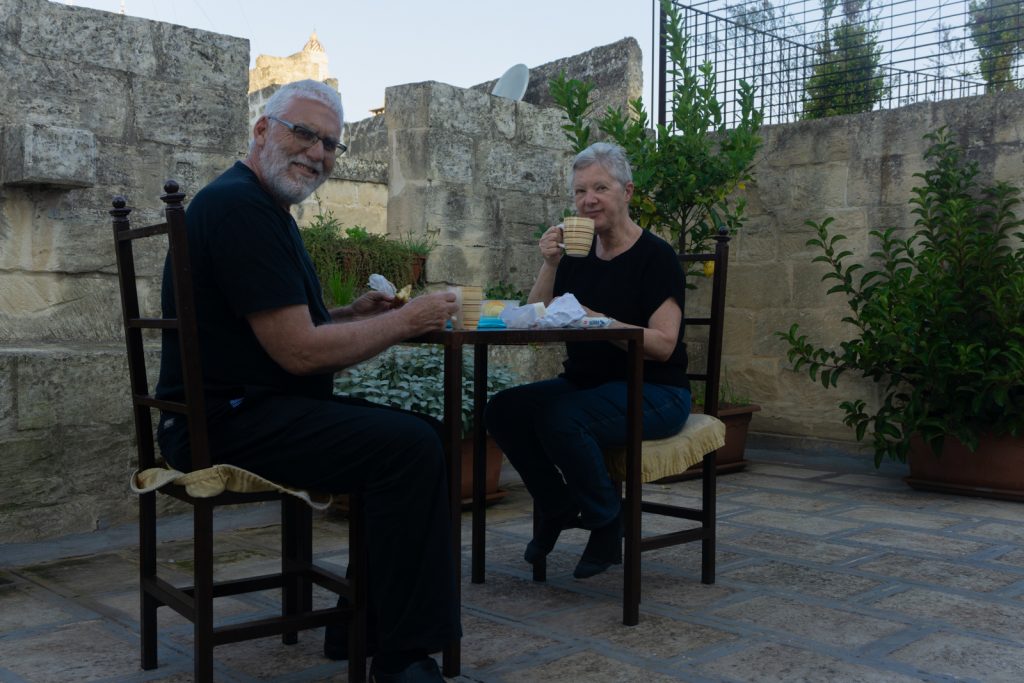 Many of Lecce’s main attractions needed no seeking out. The Roman amphitheatre adjoins the city’s main square, the imposing castle of Carlo V dominates the eastern boundary of the old city and the ornamented facade of the Palazzo dei Celestrini (once a convent, now the seat of the local government) sits next to the equally ornate Basilica of Santa Croce. Of course, Murphy’s Law of Tourism dictates that at least one major monument in each city you visit must be obscured by scaffolding. This time it was Santa Croce. However, the city had covered the scaffolding with a full-size, full-colour photographic reproduction of the church’s facade. Perhaps not as impressive as the real thing, but a lot more attractive than scaffolding.

Driven by my fascination with ancient stones, we went searching for the Roman theatre, which was harder to find. The theatre was discovered by accident during excavations in 1929 and a small museum houses some of the artifacts found on the site. For me, sitting on the same stone benches and walking up the same stone steps as audiences did around two thousand years ago is a thought-provoking experience. 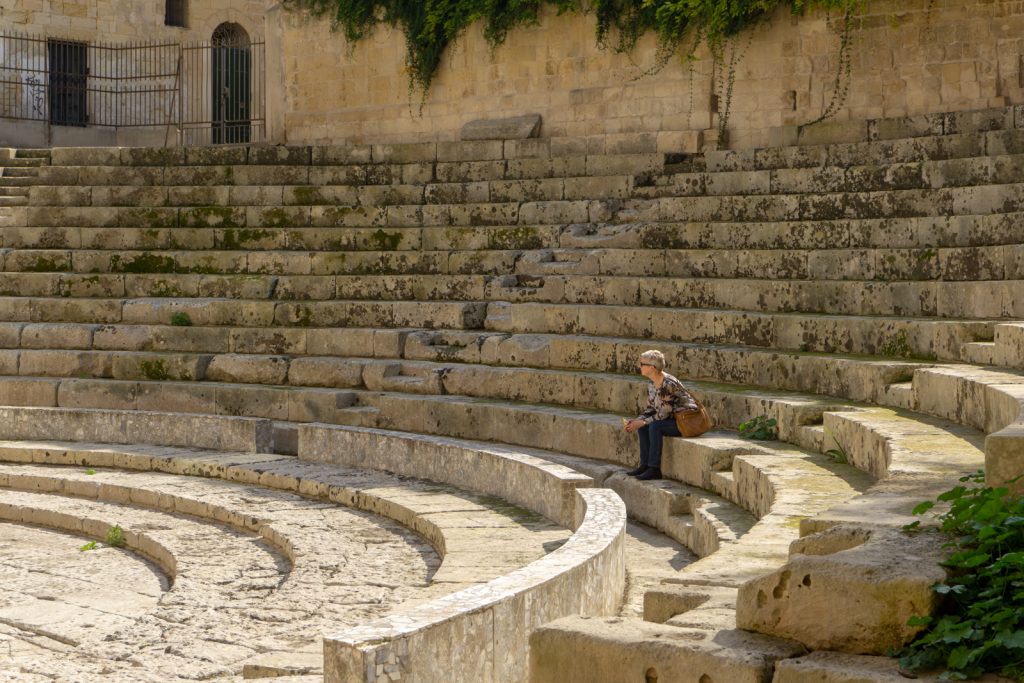 There’s more to the city than monuments, of course. There’s eating and drinking. Streets of cafés and bars for the all-important aperitivo, always served with tarelli, small crackers twisted into a ring and sometimes flavoured with fennel. Ice cream. Orecchiette, the tiny ear-shaped pasta traditionally served with turnip tops. Fava bean purée with chicory. Giant antipasto platters of cured meats and cheeses. Bombette pugliesi, made from slices of pork wrapped around cheese, then roasted on a skewer over wood or charcoal.

Our two most memorable meals, though, weren’t in Lecce at all. Lacking a car, we took small group bus tours. The first day’s tour included Otranto on the eastern coast of the Salento peninsula, a drive along the coast road past the southern-most point of the heel (where our phones informed us that we were actually in Greece) and, finally, Gallipoli. In Otranto, we had explored the old fortifications, the narrow streets and the extraordinary cathedral. Here the mosaics on the floor, illustrating the Tree of Life, were created in the 12th century. The crypt below was eerily beautiful, with its forest of marble columns and its faded frescos. But by the time we reached Gallipoli we were starving and decided to forego sightseeing in favour of lunch. 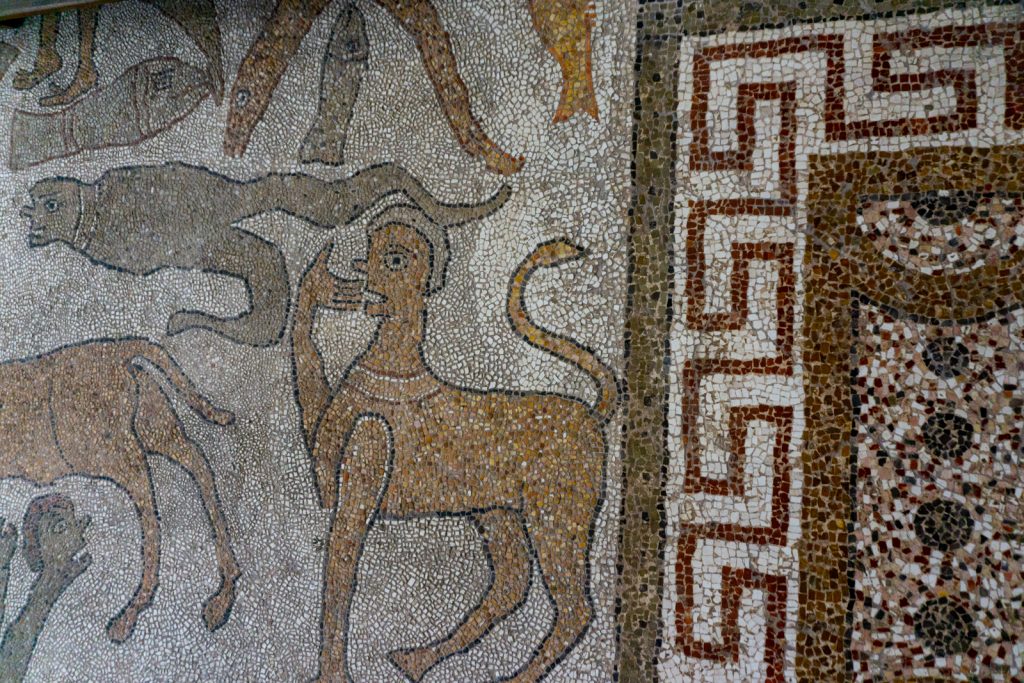 On the promenade above the luminous blue-green waters of the Gulf of Taranto we found an outdoor restaurant, Ostaria La Riviera, specialising in seafood. Fred chose tagliatelle with sea urchin – the purest taste of the sea. My cavatelli with zucchini, mussels and shrimp (the tiniest mussels and the sweetest shrimp) was the best pasta I have ever eaten. The sun, the sea, the house white wine, the food, the dashing and attentive waiters – it all coalesced to produce one of those moments you know you’ll savour forever. When you think, in our Aussie vernacular, “I wouldn’t be dead for quids”. 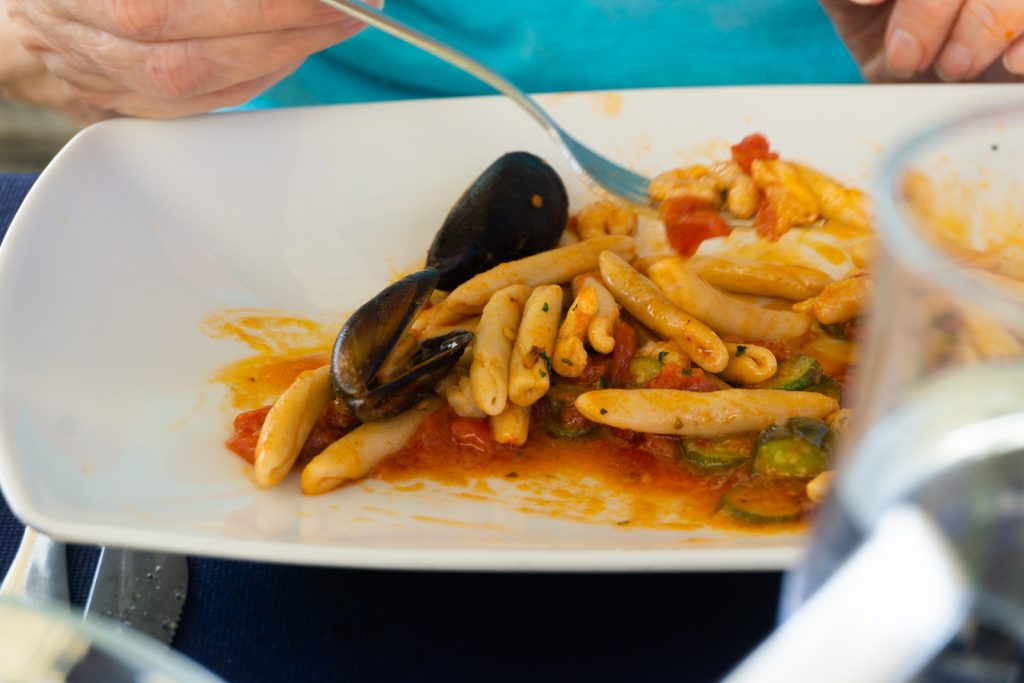 The second tour, on our final day in Puglia, took us to the white city of Ostuni, pretty Locorotondo and the seaside resort of Poligno sul Mare. And to Alberobello, the town famous for its strange conical buildings called trulli. Alberobello had a Disneyland feel. Most of the trulli have become tourist shops, restaurants or B&Bs, and even though the peak summer season was over the streets were crowded with international visitors. Selfie sticks abounded. We hiked up one longish street, took the obligatory photographs, and looked for somewhere to eat. 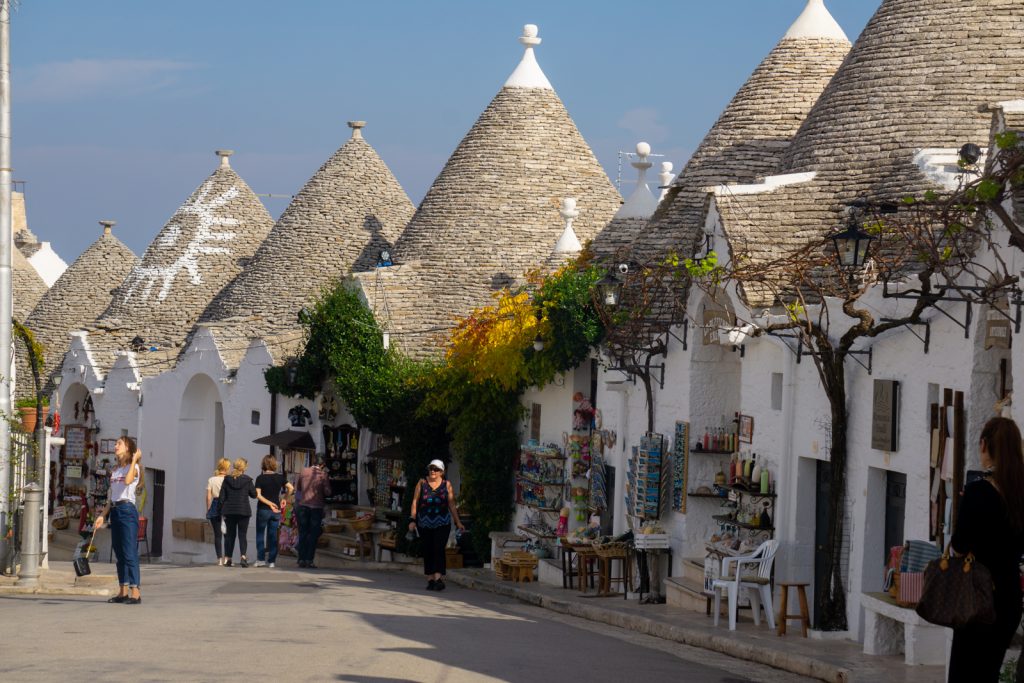 The first restaurant we tried was booked out by a Taiwanese tour group. Fortunately, as it turned out. Through a low doorway and down a steep staircase, we were lucky to discover the Trulli e Puglia Wine Bar. An obliging waitress made wine recommendations and explained the food, much of which was based on cheese. She advised us to try a slice of their special focaccia – a spicy cheese and tomato topped bread that was more pizza than sandwich.  Other snack-size offerings were based on the local burrata cheese. Made from buffalo milk, the money-bag shaped cheeses have a mozzarella skin, filled with an oozy mixture of mozzarella and cream.  We tried several variations, as well as a platter of hard cheeses with house-made relish toppings. Accompanied, of course, by excellent bread and a couple of glasses of red wine. 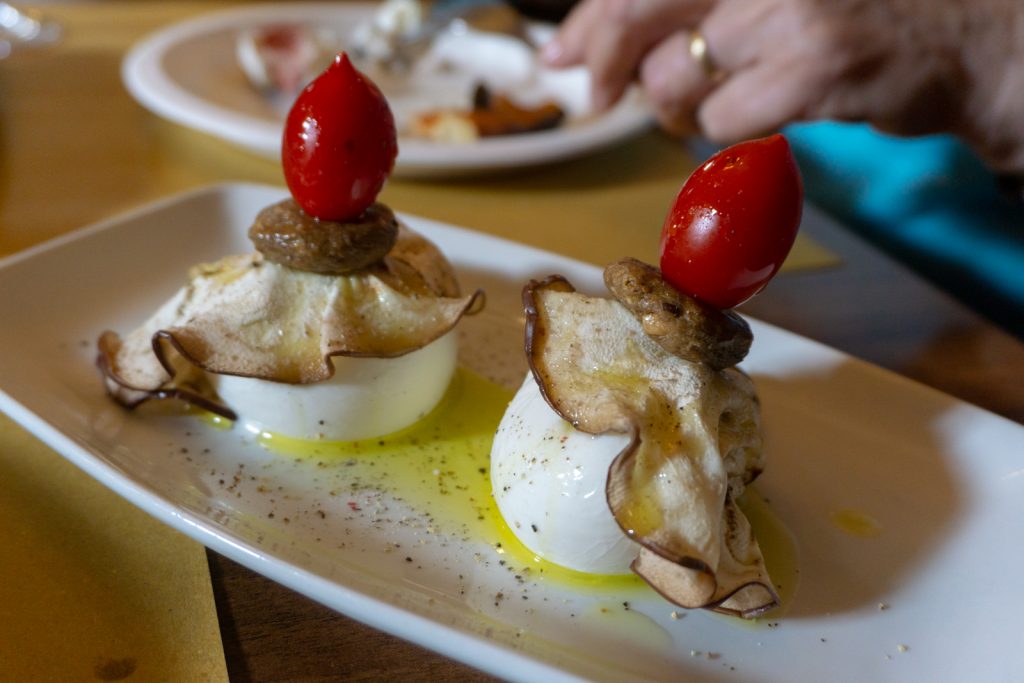 Northern Italians still decry their southern compatriots, calling them “terroni” or people who work the soil. There’s no doubt Puglia has had a troubled history, being colonised by Greeks, Romans, Turks, the Spanish and more. As recently as the 1930s, the peasants lived in grinding poverty and were ruthlessly exploited by a small number of wealthy landowners. Now, however, the region’s economy is expanding faster than others in southern Italy.

We were warned that no one would speak English and that many spoke, not Italian, but dialect. My reading beforehand told of single villages in Puglia that had two distinct local dialects, one considered more refined than the other. In the extreme south, it seems some people still speak a form of Greek. However, we found that English was widely spoken in shops and restaurants and standard Italian was understood everywhere. In the countryside, perhaps it’s different.

Maybe it was the weather, maybe the food, maybe the laid-back feeling – or maybe it was just because we’d never been there before. We’d exchanged hill-climbs for stair-climbs, Umbrian mists for southern radiance, Sagrantino for Primitivo. And we fell in love with Puglia – madly, deeply and…ahem…trulli.