Erbswurst anyone?
That’s pea soup sausage to you.

It’s surprising the things you find when you’re looking for something else. There I was looking into the history of Red Tulip After Dinner Mints for a post on my Australian Food Timeline website, when I found that an apparently unrelated Red Tulip brand had been used well before the advent of the chocolates.

It seems to have been a house brand of the Sydney department store Grace Brothers, and was applied to a whole range of products available from their much-promoted “Cash & Carry Dept.” Among the products carrying the brand were dessicated coconut, sweetened condensed milk, herrings in sauce, pure ceylon tea, pure thick cream, walnuts and self- raising flour.

But one oddity caught my eye: Red Tulip Pea Soup Sausage. Mentioned in an advertisement in 1927, this “sausage” sold for tuppence and made, according to the Grace Brothers ad,”3 pints of delicious Pea Soup”.  This led me to enquire further, speculating that this may have been the fore-runner to modern-day instant soups.

So it emerged. It seems the pea soup sausage has a long history. It didn’t originate in Australia. Erbswurst was developed in Berlin in 1867 by one Johann Heinrich Grüneberg, a cook and food processor. This invention proved very handy for the Prussian army in the Franco-Prussian War of 1870-71, where portable rations for the troops became a priority. 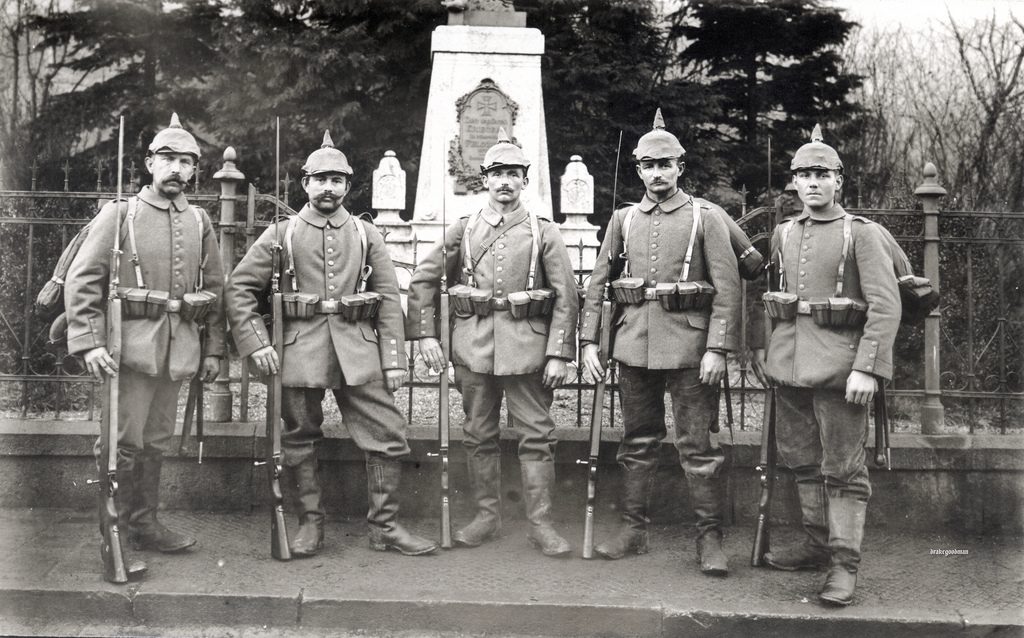 The Army research group discovered  Grüneberg’s sausage and the government bought the patent, paying him the equivalent of £6,000 (or 40,000 Prussian Thalers) for his invention. At the outbreak of the war in 1870, a factory was built at government expense, in which 1700 workers eventually produced as much as 5,000 tons of pea soup sausage. The operation was reported in the Australian press, where an eye-witness account told of “A strange-looking thick, and peculiar hard sausage, measuring very little more in length than its diameter. On being, not without force, cut through, it was found to be, in fact, an extremely solidified sort of portable pea soup.”

Called Erbswurst, loosely translated as “pea-sausage,” the product was made from finely ground peas,  mixed with pork fat, some beef and pork meat, roast onions and seasonings including “half a pound of the inventor’s secret preparation”. The mixture was well cooked and evaporated and formed into a sausage-shaped roll. The wax-paper wrapped roll was divided into cylindrical tablets, each of which could be mixed with around 250ml of water to make a nourishing soup.

As it happened, fortified by their Erbswurst, the Prussians won the war. But although included in German field rations for subsequent wars, it failed to guarantee the nation’s continued success on the battlefield. In fact, Australian soldiers on the front during World War I may also have been taking sustenance from pea soup sausage, not as part of their official rations but as one of the additional items sent by folks at home via the Australian Comforts Fund.

The sausage had been a popular item in Australia at least since 1903, when a German company from the Central Food Factory of Hohenlohe operated a very successful stand at the Royal Agricultural Society Show in Sydney. The Australian Town and Country Journal was enthusiastic, both about the display and the product:

This firm had a most attractive exhibit of the famous Hohenlohe Pea Soup Sausage. In order to give those who were not acquainted with the article an opportunity of tasting it, a staff of boys, dressed in cook’s caps and aprons, and con- trolled by a professor cook, were kept fully employed throughout the eight days of the show. Fully 50,000 persons tasted the soup and in every case pronounced it excellent.

The Hohenlohe Pea Soup Sausage commands an enormous sale throughout the German Empire, and is in daily use in every household. Anyone who claims to have a palate will readily acknowledge that the Hohenlohe Pea Soup Sausage, carefully prepared, ls equal to the best pea soup produced In the orthodox way. The advantage in the use of this article will commend itself to householders.

Every housewife will acknowledge that the preparation of soup is a tedious process, and one that ties her services to the culinary operation, as the fire has to be kept going, and the stock pot has to be continually watched. Then to produce soup for a small number of persons entails the same oversight as for fifty. Another consideration with the Australian housekeeper is the fact that very frequently in our climate, after all the most careful attention, stock made to-day is unfit for use the following morning.

The advantage, therefore, in using the Hohenlohe Soup consists In the following considerations: 1st. Its portability. It can always be kept ready for use in one’s home supplies or carried easily if travelling. 2nd. It can be made in ten minutes, though it is better for being boiled twenty minutes. 3rd. Just sufficient, no more, can be made, and the remainder of the sausage can be kept for a future occasion. 4th. It is economical—one sausage, purchased at any grocer’s for 6d, will make sufficient soup for from six to eight persons. 5th. It ls the most perfect form of food for children, who prefer it to any other. 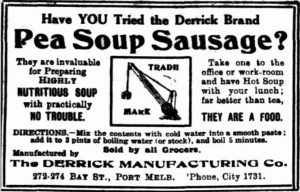 The evident success of the German product prompted local manufacturers to make their own. The Derrick Manufacturing Co. of Melbourne, otherwise well-known for their Tomatoshire Sauce (a combination of Worcestershire and tomato), produced a version they promoted as an ideal lunch at the workroom or office. The Sydney company, J. Sutton added the sausage to their range of concentrated soup products. While imports of the German product continued, made by both Hohenlohe and Knorr, local versions were available at a lower price. 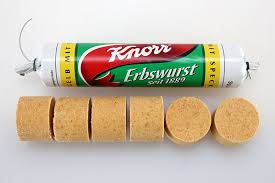 In Germany, you can still buy Erbswurst. Since 1889, it has been produced by the Knorr company. It’s one of the oldest industrially manufactured, ready-made meals and is still popular with hikers and expeditioners as a survival food.

Despite appearing regularly in grocers’ advertisements right through the 1930s and ’40s, and one mysterious mention of the imported product in The Canberra Times in 1964, pea soup sausage appears to have disappeared in Australia. There are online sellers who will ship worldwide, but chances are our quarantine people would look unkindly on any attempt to import something with “wurst” in its name.  So you’ll just have to put it on your list as a food experience to try next time you’re in Europe. And stick to making pea soup the old-fashioned way.