Whatever happened to O.T.?
The drink with 'twang'

Imagine a drink that’s perfect for summer, perfect for winter and absolutely ideal for spring. It helps keep colds and flu away and is an instant cure for indigestion. And although it’s non-alcoholic (so your wowser friends won’t raise an eyebrow if you indulge) it makes a great little cocktail if you slurp a bit into your gin. Or your scotch. Or your beer.

This paragon of drinks goes by the name of O.T.  Sadly, it’s no longer available. But last century, from the noughties to the forties, it was so popular that the manufacturers took to running advertisements threatening dire legal consequences for any imitators. This didn’t stop a few newspapers printing do-it-yourself recipes for the stuff, from which we learn that it was a type of cordial that had chillies as its main ingredient. Yes, chillies.

One of the recipes for Home-Made O.T. called for three dozen chillies, 1 lb. (450g) sugar, 1 level dessertspoon tartaric acid, 30 drops essence of lemon and 1 quart (1130ml) water. Directions were: Pour water on chillies, bring to the boil and leave overnight. Next day, boil again, add sugar and acid and simmer 20 minutes. Cool and strain, add lemon essence and a little caramel to colour. Bottle and use 1 tablespoon or more, according to taste, in a glass of water.

The cordial was launched as Dixon’s O.T. CHILLIE, by the company that eventually became Kia-Ora. Established in 1898 as the Prahran Ice and Aerated Water Company by John Dixon, the company boasted the latest equipment for producing soft drinks including soda water, lemonades, ginger ale, sarsaparilla, tonic water, ginger beer and cordials of all flavours.

However, it was O.T. that made Dixon’s fortune. It was developed in 1905 (reputedly from a recipe shared by an Indian Maharaja) and two years later the company changed its name to O.T. Limited. The name and a distinctive chilli symbol were registered as trademarks.

An article in the Prahran Telegraph in 1909 extolled the virtues of the drink, calling it “non-intoxicant, …nutritive, sustaining, and pleasingly palatable” and claiming that it “would hit the taste of temperance people, moderate drinkers, and those who desired an invigorating addition to alcoholic liquor”. But it wasn’t just a pleasant drink. Oh no. The writer also pointed out that because of what he called its distinctive twang  “the article has become a household word for its medicinal properties, no less than for its invigorating effects as a thirst quencher and an appetising beverage.”

So popular was O.T. that sales climbed from £400 to £4,000 in the first year, reaching £40,000 in 1908. By then, the product was being sold in Columbo, Hong Kong, Shanghai and throughout South Africa and was making inroads into South America. A second factory was constructed in Sydney. By 1911, when a public offer of shares was made, the company had agents in England, India, South Africa, Singapore, Hong Kong, Japan, Korea and Fiji. Further factories were opened in Great Britain (1917), San Francisco in the US, Valencia in Spain and Messina in Italy but the headquarters remained in High Street, Prahran.

During a February heatwave in Melbourne in 1914, a Herald reporter waxed lyrical about the refreshing quality of O.T., sampled in the cool depths of the Prahran factory. He was also introduced to the company’s Merry Cup, ” a fruity liquid, pure, palatable, nutritive, and refreshing”.

Dixon was a great believer in the power of newspaper advertising, which no doubt helped him gain a certain amount of editorial space in the local press. The O.T. ads increased in sophistication over the years. Initially purely type, they progressed to the highly illustrated style of the 1940s.

An early small space ad promoted A GOOD APPETISER – GIN AND O.T., and declared “As an appetiser Gin and O.T.is a strong rival to Gin and Vermouth in public favour.  As a digestive or remedy for indigestion or flatulence, there is nothing better than O.T. neat, or O.T. with a little gin, sipped quietly.  O.T. improves wonderfullv the flavour of Gin, and, in fact, all other beverages-water, whisky, and beer. “

The drink was evidently the answer to many an everyday health issue, from flatulence to the common cold. However, it appeared to fade from view soon after the end of World War II.  Its decline coincided with the increasing popularity of another pick-me-up drink: Coca Cola. 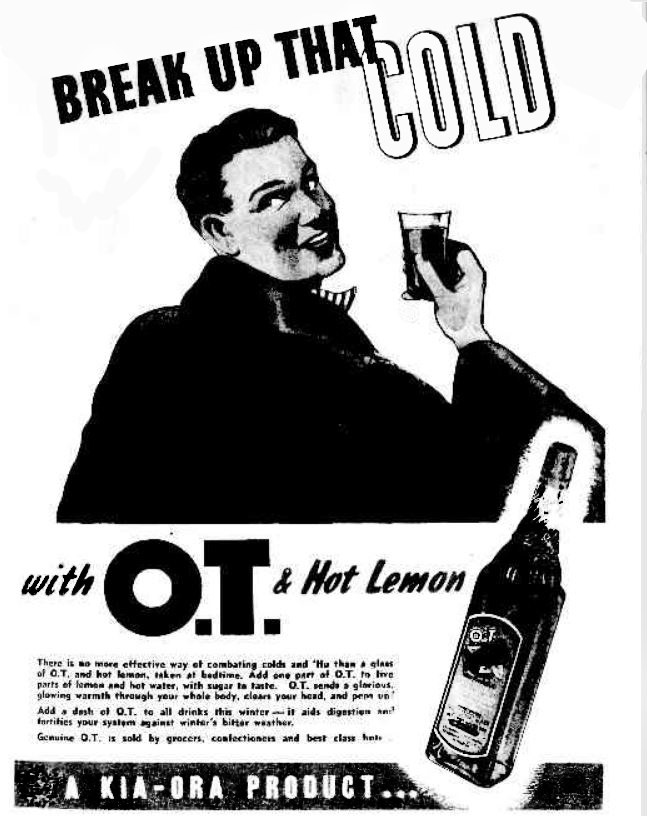 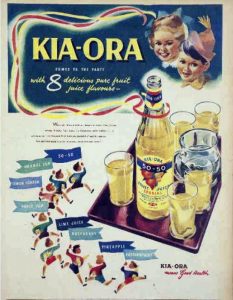 Although O.T. was the mainstay of the business in its early days, it was the Kia-Ora brand that proved most enduring. Originally simply the brand for the company’s lemon squash and often a mere footnote in O.T. ads, it out-lived the chilli drink by many decades. The words Kia-Ora come from the Maori language meaning, literally, “be well” and used for both hello and goodbye in much the same way as the Italian “Ciao”. It was a popular property and street name in Australia in the early 20th century.

According to Grace’s Guide to British Industrial History, the Kia-Ora brand was first used for lemon squash by Arthur Gasquoine of Sydney, who founded an ice and soft-drink business in 1896. However, the Sands Directories for that and the following year fail to reveal any trace of him. It seems likely, though, that he is the same A. H. Gasquoine who later became the London agent for John Dixon’s company.

The Kia-Ora brand was launched in Great Britain in 1917 and sugar-free Kia-Ora cordials are still on the market there. Dixon sold the British rights in 1929 and the U.K. brand is now owned by the Coca Cola Company. In Australia, various products were released under the Kia-Ora brand including the popular 50:50 (half lemon, half orange) cordial that was launched in 1933. At that point, the product range included cordials and fruit drinks, concentrated fruit juices, and essences, tomato pulp, paper containers, cake cones, corrugated strawboard, cardboard containers and ice-cream cones. 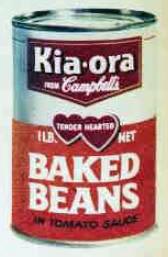 In the 1940s, the Australian company began to operate under the name of Kia-Ora Industries Ltd and after World War II the company diversified into canned food, including baked beans, tinned spaghetti (including the infamous Spaghetti Os), and soup.