The clubs with no beer
Melbourne's 1950s nightclubs

As the 1960s approached, the city that is now renowned for its nightlife was dull indeed – and not just on Sundays. The six o’clock swill dominated drinking habits. The cool crowd gathered in coffee lounges to sip espresso and listen to jazz. The less cool were just getting over their passion for square dancing or going to dinner dances in the better hotels. In theatres, burlesque lingered on – you could see quite a lot of bare flesh from the safety of your seat at the Tivoli. But Las Vegas it wasn’t.

There were one or two nightspots where the smart set congregated. In South Yarra, as early as 1942, you could kick on at Claridge’s, where Fred Hoskings and his band would entertain you until 2am. As long as it wasn’t Sunday, when Hal Fletcher and His Band of Entertainers would enhance your dinner experience from 6pm to 10pm.

Reinvented in 1945 as the “New Claridge’s”, the club offered a dinner dance early in the evening and a “supper dance” until the early hours. At the gala re-opening the highlight was an original song, “Melbourne Town”, performed by the piano accordionist and dedicated to the Lord Mayor (who, perhaps fortunately for him, could not be present).

The Argus reported in 1954 that the proprietors of Claridge’s, Walter and Mary Ebstein, were off overseas to study the nightlife of English, American and European Clubs. They promised that, on their return, they would launch a fabulous new room “on a par with the world’s brightest night spots”. The new, improved Claridges was launched with a gala event in 1955 but perhaps the reality did not live up to the dream and it was destined to be short-lived. 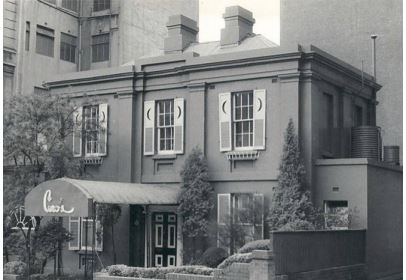 Ciro’s, in Exhibition Street, was variously a nightclub, a restaurant, a reception centre and a cabaret venue. Managed by David Silk, it opened in 1948. During the early years, the in-house band was led by sax-player Bobby Limb, later to become a star of Australian radio, stage and television. In 1956, Ciro’s was the location for a nightclub scene in the movie On the Beach. Ava Gardner must have been less than impressed, making her famous comment that Melbourne was the perfect place to make a movie about the end of the world.

By 1953, other nightclubs had come and gone – including the Roosevelt, the Delphic and the Copacabana (which became the Mountbatten). Sammy Lee, who had run successful nightclubs in Sydney, opened the Stork Club in Melbourne but very soon gave up and went home.

Drinks under the table

The problem was the licensing laws. In Victoria, it was against the law to consume liquor in a dance hall. Cabarets and nightclubs were classed as dance halls. This meant that the club couldn’t sell you liquor, but also that you couldn’t take your own. Despite the law, thirsty patrons concealed the odd bottle of Scotch or gin up their skirts or under their coats. Newspapers from the late 1940s through the 1950s report many a fine being handed down to those who were caught out.

Sometimes the clubs themselves, or their waiters, became greedy and would supply illicit liquor at vastly inflated prices. The Licensing Squad policed the law with vigour and after a club had received several convictions for supplying alcohol it could be closed down by a Supreme Court order.

Claridge’s, from its earliest days, had run-ins with the licensing laws. In 1947, the proprietors protested in court that they had done everything they could to stop people from smuggling in liquor. The waiters checked under the tables every half hour, they said. Yet in 1953, one of the waiters was fined for selling liquor to patrons. Plainclothes policemen and women posed as customers to snare the law-breakers.

An article in The Herald in January 1953 asked whether Melbourne would have even one nightclub left by the time the Olympic Games arrived. Ciro’s had just abandoned its cabaret in favour of becoming a function centre. The managing director, David Silk, said overseas visitors expressed amazement that drinks were not available at the nightclub.

“IN 1951 I guaranteed that I would ensure that no liquor was sold at Ciro’s,” he told the Herald’s reporter. “Since then I have personally seen that not one glass was sold. But still the police raids continued.

“Sometimes, even three times a night, we would see from four to 12 policemen stamp into the club and begin a minute inspection of the table and patrons.

“I often wonder what happened to some of the half-empty bottles of good Scotch whisky taken away by the police,” he added.

In 1956, with the Olympic Games looming, there was pressure to relax the State’s licensing laws. But the wowsers were still out in force. One Member of Parliament went so far as to say that holding the Games in Melbourne was “an international plot to alter the Licensing Act”.

One City of Melbourne councillor had the temerity to suggest that Melbourne should have more nightlife. The Lord Mayor retorted Melbourne did not need “night clubs, squawking crooners and blatant music” to be bright. For the Olympics, he added, there would be enough ballet, drama and art to please anybody, and “breathtaking city decorations”. A referendum in March 1956 returned a majority in favour of retaining six o’clock closing, so visitors for the Games had to be content with cultural pursuits. And decorations.

The Age editorialised: “Melbourne is a good city, and it would be no better if citizens who want it to wear a crepe hatband and carry a copy of “A Warning to Wantons” under its arm were to have their way. It still has some distance to go before becoming a new Babylon.”

Despite the obstacles, there were others who took up the challenge. The Moulin Rouge opened in 1954 in a (now demolished) stately home in Dickens Street, Elwood. It offered continental cuisine and a cabaret on Friday, Saturday and Sunday nights featuring the Cubana Orchestra. But, we assume, no liquor. It endured at least until 1956. By then the cabaret was available every night except Tuesday, with Sergio’s Latin American Music to keep the crowd entertained. 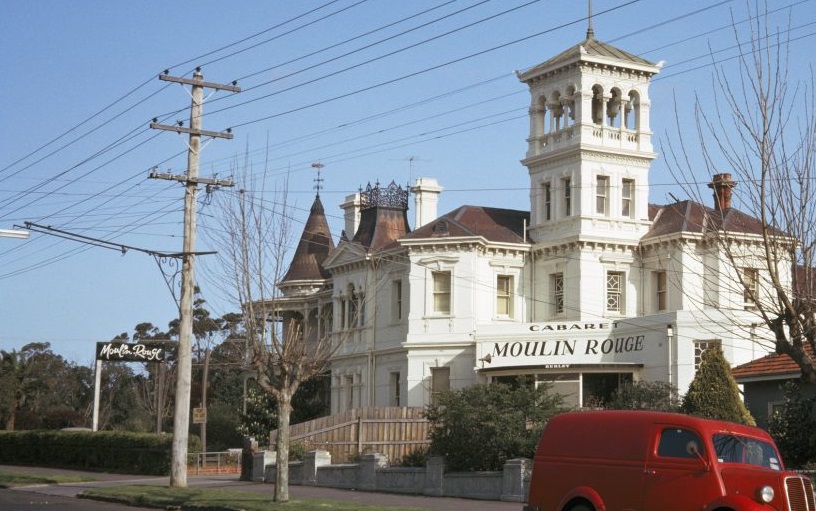 In nearby High Street, St Kilda, Austrian immigrant Robert Maas converted his Victory Café into the eponymous Maas Cabaret. Maas had been associated with the restaurant business in Vienna. He was the host, his wife was the chef and his son, Henry, was the hat-check boy. Henry went on to form the performance group, the Buzby Berkeleys, then the ‘80s cult band Bachelors from Prague. His own café and nightclubs brought cabaret to a new generation.

The Maas Cabaret had a longer run than many, closing in 1967. Ciro’s, in its various guises, also endured until 1967. Having finally obtained a restaurant licence, the club was permitted to serve alcohol from 8.30pm to 3am. But, according to David Silk, it seemed people were not prepared to wait until 8.30 to eat and the lavish and expensive floor shows failed to attract the expected crowds. It went into receivership that May.

Meanwhile, Claridge’s had disappeared, to be replaced in 1959 by what was, briefly, Melbourne’s signature nightclub – The Embers. Operated by James Noall, the club was originally intended to cater to teenagers but swiftly drew an adult audience. Nearly 400 guests danced at the August opening, admiring the American vibe, the dramatic red and black décor and the sunken pool. The chairs, by prominent young designer Clement Meadmore, were particularly notable.

Just a few months later, disaster struck. Just as a torch singer announced that she would sing “Fire down below”, flames leapt from an open oil-burning barbecue to the timber ceiling of the club. The flames spread across the roof as the guests rushed for the doors, but the heroic band continued to play until everyone had left and the flames had reached their stand. “Most of their instruments were lost,” reported The Age. 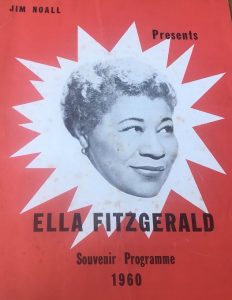 Rebuilding began immediately and the club re-opened early the following year. It was open every night until 1.30am and 2am on Saturdays and became a noted venue for jazz on Sunday afternoons and evenings. During its brief and glamorous existence, The Embers featured international stars, among the most notable being Ella Fitzgerald and Oscar Peterson.

In 1960, the special five-course dinner menu would set you back just 25 shillings ($2.50). There was also the choice of an extensive A La Carte Menu prepared by Mr Buchs, The Embers’ Head Chef. This featured sixties classics like Chicken in the Basket, Tornedos Rossini and Steak Diane. But what happened if you wanted a drink?

If you made a reservation at the club, you could apply to the Licensing Court for a liquor permit, usually granted Monday to Friday until approximately 1.30am or on a Saturday night until 11.30pm (the following day being Sunday). These could be obtained for special occasions such as birthday parties, engagement parties and dinner dances. Presumably, if you just dropped in, you had to be content with soft drinks. In July 1961, The Embers obtained a restaurant licence but was not allowed to sell beer, ale or porter. A condition of the license was that seating would not exceed 425 people. 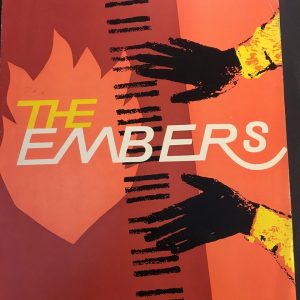 There was more going on at The Embers than cabaret. It was a popular venue for fashion parades, charity luncheons and receptions. From March 1960, the radio station 3UZ began a regular broadcast from The Embers, offering vocal acts, dance music and interviews with celebrities, entertainers and guests. A special radio studio was installed on the premises.

But the club’s troubles weren’t over. In June 1960 a bomb blew the street front apart. Dismissed by James Noall as an attempted robbery, it seems likely that there was a more sinister motive. Some years later, Ciro’s was also bombed. Both Noall and Ciro’s David Silk were heavily involved in horse-racing and Noall was later investigated by the gaming squad, so both were almost certainly acquainted with some shady characters.

The demise of cabaret

The Embers gave way to the Playboy Club in 1963, also operated by Noall. This, too, lasted just a few years, becoming the Winston Charles discotheque in 1967. It may well have been Melbourne’s first fully licensed disco. The site, at 53 Toorak Road, is now an apartment block. Ciro’s was demolished and replaced by an office tower.

In 1966, as the fortunes of other nightclubs were declining, The Lido opened in the basement of a Russell Street car park. Operated by David McIlwraith, it offered dinner and drinks plus sophisticated vaudeville reviews. The Lido had a permanent company of 40 showgirls, dancers, singers and musicians and featured stars such as Lovelace Watkins, Winifred Atwell, Eartha Kitt, Shirley Bassey and June Bronhill. But in 1970 it was sold and became the El Toro Espana – a nightclub with live, penned bulls.

But by the late 1960s, cabaret was well past its heyday. Top-line overseas acts were appearing in concert halls and stadiums, not intimate nightclubs. Less noted performers were popping up at Leagues Clubs. In 1968 pub trading hours were extended to 10 o’clock and the pub rock scene gathered momentum.

Gradually, Melbourne began to lose its sanctimonious Victorian air and transform itself into a 24-hour city. It didn’t happen overnight, but it did happen. Today, when you can get a drink almost anywhere at any time, the idea of sneaking a bottle of gin into a nightclub seems ludicrous. And the Licensing Squad have lost the chance to add a secret slug of confiscated whisky to the morning coffee.