Mouth in the south 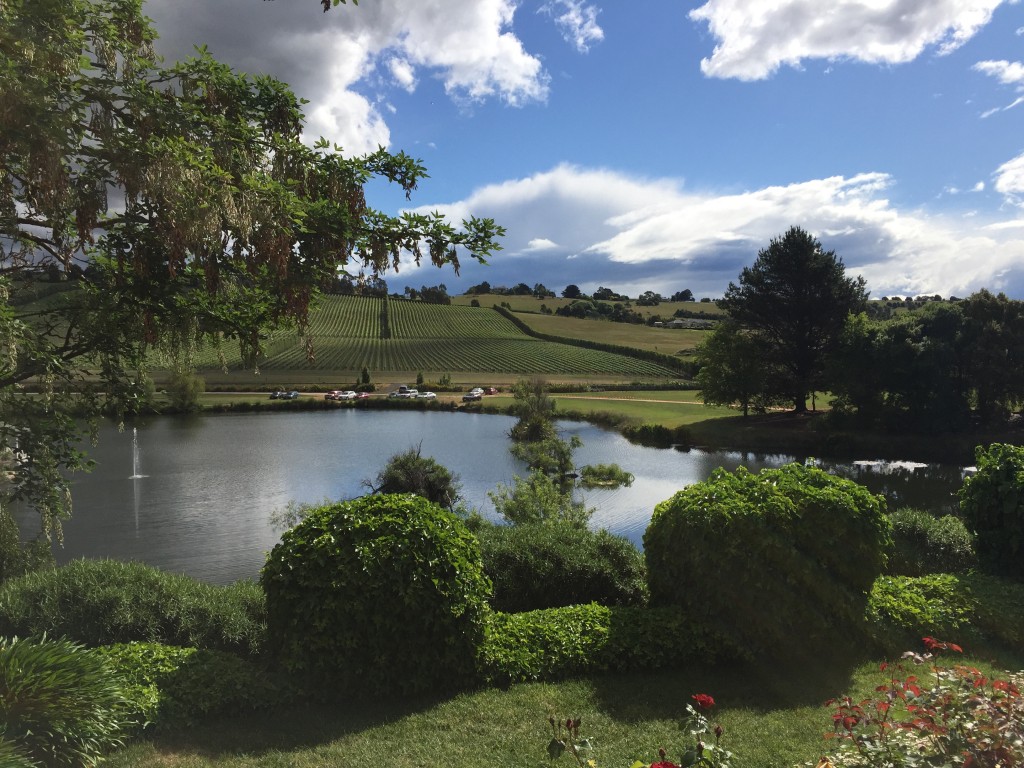 It was always going to be a challenge. A weekend of eating and drinking in the company of a group of thirty-somethings. But the lure of Tasmanian sparkling wine and fresh produce was impossible to resist, so the airfares were booked, the accommodation sorted. By late-morning Friday my daughter and I had arrived at our Air B&B apartment in Launceston.

Less than 30 minutes later, we were sampling our first glass of Riesling over a shared cheese and paté board at Stillwater restaurant. Local Riesling – Waterton is about as local as you can get in Launceston. To quote one critic, it had “the zesty punch of citrus, beautiful floral aromatics and outstanding mouth-feel yet with crispness”. Yes, all that. Sunshine and black swans on the Tamar outside, a sense of wellbeing inside. But we were just getting started. 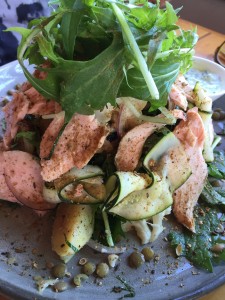 Lunch was booked at 2pm, after two more members of our party arrived. Hallam’s Waterfront was just three doors down Park Street from our apartment. Famous for its seafood, it seemed strangely empty for Friday lunch. I passed on the gin and tonics to start, catching up later as another bottle of Riesling arrived.

Tasmania – so oysters. Briney and plump and, just for fun, augmented with a cucumber and shallot dressing. Then burnt vanilla salt baked salmon salad with green lentils, smoked potato, zucchini, fennel and cucumber yoghurt. The smoky potatoes seemed to bring out the best in the salmon, with all the other flavours in harmony. Between us we covered off most of the lunchtime menu – smoked croquettes, scallops, chowder, calamari and perfectly grilled fish.

The second bottle of wine was finished on the sunlit verandah to the accompaniment of rattling rigging from the sailing club next door, while we plotted our next move.  A post-prandial stroll seemed like a good idea. A cryptic comment from our taxi driver had mentioned monkeys in the park, so we went in search of them. Alas, the Macaques weren’t free range, and by the time we arrived at their enclosure they had retired for the evening. There was nothing for it but to have another drink.

The Red Brick Road Ciderworks uses only Tasmanian apples and pears and it’s all unfined, unfiltered, unpasteurised and like that. Their Ciderhouse, in Launceston’s Brisbane Street, is a hole in the wall, with a few barrel seats on the pavement outside. The Geeveston Fanny Cider wasn’t on that day, but the Orange Pippin was a dry and substantial alternative. Others opted for scrumpy or a cider rosé “blushed” with pinot noir. A couple of ciders in the sun were enough to induce a particularly mellow frame of mind.

But these were serious drinkers I was messing with.  Someone mentioned coffee martinis, and suddenly we were off on a quest for a cocktail bar. Geronimo Aperitivo Bar and Restaurant looked promising and had a cool urban ambiance that soothed our over-heated bodies and brains. As did the Aperol Spritz that slid down soooo easily.

I took the next round gently – wine and cheese in the apartment. And withdrew from the following one – fish and chips (and more wine) at the next-door yacht club. But that was just Day One.

This was what we came for. Effervescence Tasmania – a festival of sparkling wine, held at Josef Chromy Wines, just outside Launceston.  The Grand Degustation Dinner on Friday night was unavailable to such as us, with the local wineries each allocated a table for their invited guests. The next-best choice was the Meet the Producers lunch. This included a masterclass with Tetsuya Wakado, a three-course shared-table lunch with matching wines and entry to the Grand Tasting – a long tent with Tasmania’s finest sparkling wines for tasting and purchase.

The masterclass, unfortunately, took place in a rotunda protruding over the lake. At least, Tetsuya and assistants were in the rotunda. Spectators jostled for position, with some clinging to the railings above the water. We witnessed the slow death of an abalone on the grill plate, learned how to make scrambled eggs with the addition of tinned creamed corn, and saw Tetsuya cook salmon for the first time in many years (thank you sponsors). At this point it was still, perhaps fortunately, a rather dry argument.
The producer’s lunch menu ran as follows: 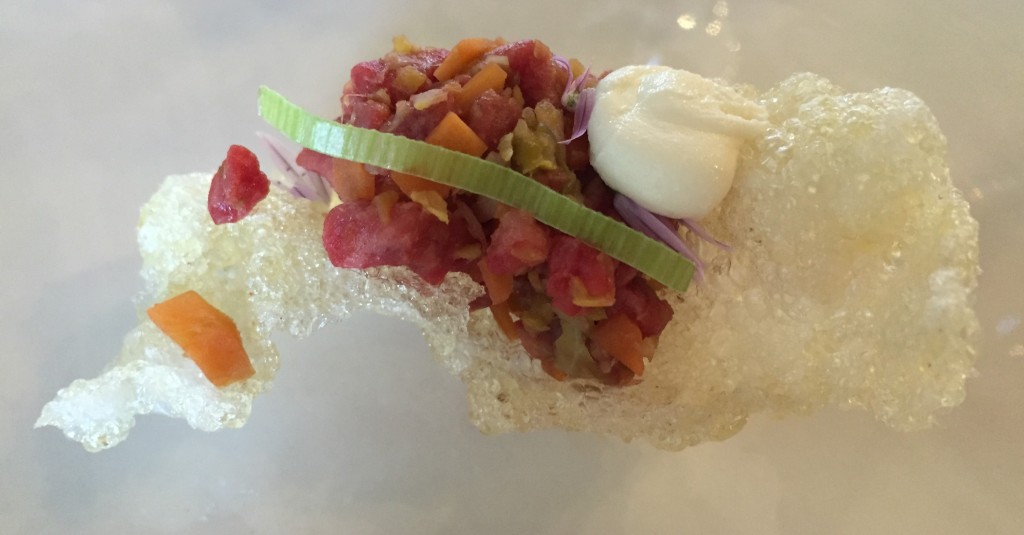 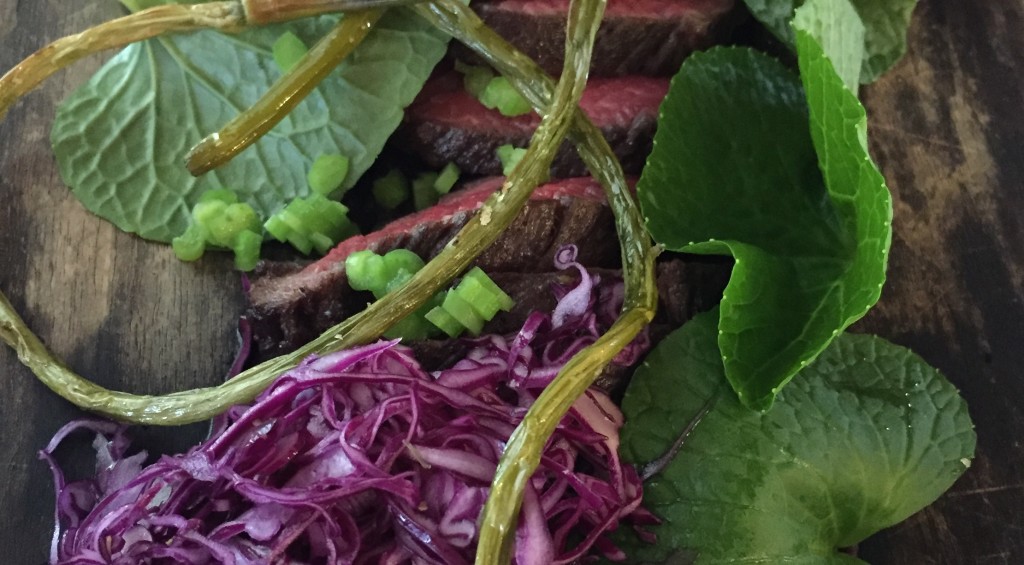 All accompanied, of course, by Josef Chromy wines, from vintage sparkling through Pinot Noir to sparkling rosé. The food was not to be faulted.  Highlights were the caviar, the salmon and the tiny pickled vegetables.  And the potatoes. 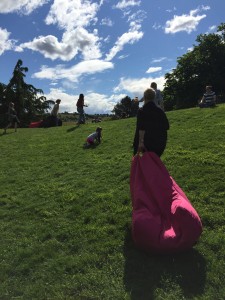 Lunch drawing to a close at around 3pm, we then had some hours to pass before “Bubbles and Beats” in the evening.  Oh dear – we felt obliged to taste more sparkling wine. In a long white marquee, fifteen of Tasmania’s top sparkling wine houses were offering tastings and sales. It was a chance to sample the spectacular late-disgorged House of Arras offering, without spending upwards of $130. And it was a chance to lounge on a bean-bag in the sunshine, overlooking the Josef Chromy lake and vineyards, drinking one of the slightly more affordable drops.

Thus we struggled through to 6.30, when long tables replaced the lunchtime arrangements and plates of natural oysters arrived. The food that followed was more playful, with snack boxes and skewers, sausages and savoury lollipops. The DJ took the stand and the crowd slowly moved into dance mode. The bar was very much open and we kept the wine (Chromy’s pinot noir) flowing freely. When the taxi arrived at 11pm it was none too soon. 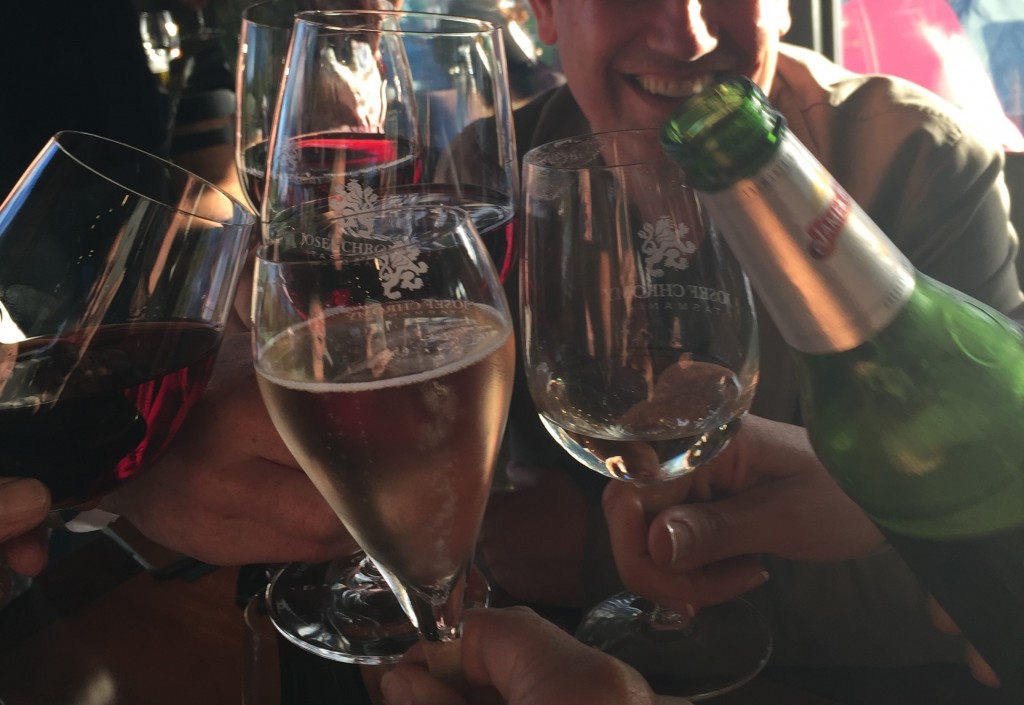 On Sunday we were all very subdued. A stroll in the brisk breeze to nearby Launceston Seaport helped clear a few befuddled heads, but we weren’t tempted by the cafés and bars along the boardwalk.  The fragile feeling continued into lunch at Stillwater. So much so that the Cape Grim sparkling water was the beverage of choice as we shared a pretty entrée of scallops. 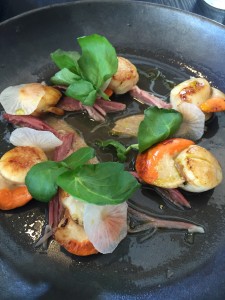 I followed this with white fish tempura with shoestring fries and miso aioli. Essentially, it was a mini serve of fish and chips – perhaps not the most inspiring choice, but another Tasmanian box ticked.  By then, of course, the Waterton Reisling was looking more appealing. Then, as our strength returned, it was on to cake and cream.

Stillwater is a serene space in a restored mill building, overlooking the Tamar estuary. There are swans cruising, masts swaying, ripples twinkling through the windows. But despite the relaxed beach-house feel the service is professional and the food is serious. We left feeling much restored.

Fortunately for me, it wasn’t another day of cider bars and cocktail lounges. We did see the monkeys. They were doing the usual amusing things that monkeys do. Later, a disappointing and over-priced Thai meal meant we ended our visit on something of a low note, rescued to a limited extent by a few more glasses of wine in our apartment.

I hopped on the Monday morning flight from Launceston feeling slightly sunburnt, slightly dyspeptic, slightly weary. But also pretty chuffed that I’d survived the experience without too much piking out. However, unlike my travelling companions, I wouldn’t have been up for a repeat performance the following weekend.