“If this is cottage pie, it must be Tuesday”

My earliest memory involves food.  I was sitting in a high chair, confined by safety straps, in the vast and empty dining room of my great aunt’s home. It was (I now realise) Sunday night and the family was gathering for ‘tea’.  Someone had placed an enamel dish of something unrecognisable in front of me and left the room.  However, as my toddler spoon descended towards the food, my aunt rushed into the room, shrieking, “Jan’s got Spotty’s dinner, Jan’s got Spotty’s dinner”.  I don’t know whether she was worried about my safety, or afraid her beloved fox terrier was about to go hungry.

As I was growing up, we had a rigid culinary calendar, of which the centerpiece was the Sunday roast.  Over the next two days, you used up the leftovers.  Other days had similarly fixed menus.

Our favourite was Saturday.  Cornish pasties.  Home-made, according to the traditional family recipe handed down from mothers to daughters (and daughters-in-law).  Legend has it that when my father’s extended family gathered for Cornish pasties, my great grandmother marked each one with a symbol that identified each person’s preferences.  Uncle Bill – light on the onion, plenty of meat.  Auntie Marie – not too much salt.

It was a tradition developed in the Cornish tin mines, when a miner ate half his pastie mid-morning and saved the rest for lunch.  The pastry was marked so he could identify his own half-eaten meal, while the crimped crust allowed him to hold the pastie with his filthy fingers, without contaminating his food.  The crust was discarded afterwards.  Our family pasties were goliaths of their kind.  Their ends hung over the edges of the average dinner plate. The convention was to cut off a corner and put it aside for morning tea on Sunday – a warm-up for the lunchtime roast!

Growing up in Melbourne during the ‘50s and ‘60s meant living through Australia’s transition from plain English cooking to a more cosmopolitan cuisine.  By the time I joined my first advertising agency, in 1965, the average housewife was experimenting with pasta.  Over the next decade, we discovered pizza, real Chinese food, Indian curries and that seventies classic, the fondue.  It was the golden age of the dinner party, and women’s magazines were full of helpful information about napkin folding, seating arrangements and table decorations.  And recipes, of course.

In 1969, I became a full-time copywriter at Clemenger Melbourne. As well as writing Kmart catalogues and radio commercials for Luna Park, I started to write ads for things Australians put in their mouths.  Peters Ice Cream, Allen’s confectionery and Courage Beer were among my early clients.

After seven years of writing press, magazine, radio and television ads for ice cream, lollies, paint, beer, gas cooking, cruises, dry cleaning and a multitude of other products, I took time out to travel.  Over three months in Perugia, Italy, I acquired a reasonable grasp of the language and discovered how Italians really eat.  Or, rather, how the Umbrians eat, how the Bolognesi eat, how the Romans eat, how they eat in the Abruzzo, the Veneto and the Val d’Aosta.  What an introduction to regional food!

For the following twelve months I travelled. An overland trip from Kathmandu to London was a culinary adventure (one fraught with peril, as many of my fellow travellers discovered).  Although I managed to avoid Delhi belly, the discipline of eating only fruit you have peeled yourself has left me with a marked distaste for mangoes and watermelon.

Many of the memories of this time are food-related – acquiring the art of eating curry with my fingers (always the right hand only), breakfasting in Greece on fresh yogurt and local honey, amazing cakes in Austria and Germany, herrings in Amsterdam, the Dutch custom of serving hot chips with mayonnaise, the astonishing array of fish, meats, cheeses and breads that constitute a Scandinavian breakfast.  In London, I experienced a fairytale Christmas, at the home of a professional cook.  Around her kitchen table, set by a window overlooking snowy Hampstead Heath, twelve people from five different countries enjoyed turkey with all the trimmings, flaming pudding, gingerbread, eggnog and general good cheer.

Back in Australia I returned to the advertising business, producing television and print campaigns for well-known brands including Allen’s Anticol (‘Puts out the fire in your throat’), Campbells Soups, Four ‘n’Twenty Pies, Wedgwood Pastries, Nabisco, Gillette and Bowater Scott.   I shot television commercials in Paris, Alaska and up and down Australia’s east coast. 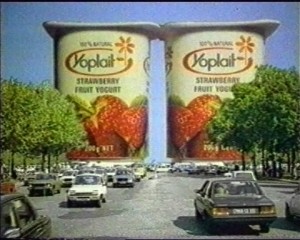 Among my achievements was helping to make yogurt an every day part of the Australian diet.  Prior to the launch of Yoplait, yogurt was a ‘fringe food’ in this country. The launch campaign put fruit yogurt on the average family’s shopping list for the first time.  The line “It’s French for yogurt” set the foundation for a campaign that lasted for nearly two decades.

Meanwhile, I had become the mother of two girls, giving me yet another perspective on the world of food and cooking.  Suddenly, bland became better and eating out became more of a treat than ever.  Travelling was different, too.  Undaunted, I took five months off and the family set out on a round-Australia road trip.  We covered 32,000 kilometers and saw most of the edges and quite a lot of the middle of Australia, managing to store away some knowledge of local produce along the way.

In Broome, for example, a local fisherman spoke scornfully of trevally.  “Neighbour fish, I call ‘em,” he snorted. When we asked why, he explained “You don’t eat  ‘em, you give ‘em to your neighbours.”  In Darwin, we discovered the local version of the classic pub bistro dish ‘Surf & Turf’.  In deference to the local specialties, it became ‘Barra & Buff’.

Back in Melbourne, and back in advertising, I worked on the first campaign for dairy products to concentrate on the importance of calcium in the prevention of osteoporosis.

I had always said that Canberra was one of the few places where you could work in advertising and live in the country, without having to drive for three hours a day. And so it came to pass. Offered a job as creative director at ad agency Grey in Canberra, I seized the chance.

In Bungendore, a mere 30 minutes from the office in peak hour (well, peak moment, really) we rediscovered the taste of tomatoes, sweet corn and asparagus fresh from the garden.  Despite the best efforts of the local rosellas and cockatoos, we managed to harvest enough quinces, peaches, nectarines, apples, pears, grapes and apricots to feel blessed.

Now we’ve moved again. Another chapter in a foodie life, in an apartment just down the road from Melbourne’s best Vietnamese restaurants. The adventure continues.