The great Australian pie
Fast food with a history

Australians’ relationship with the pie goes back a long way. Back to Mother England, in fact, where the word “pye” first entered the language in the 14th century. The early English pies weren’t famed for their succulent flaky crust though. Like the Romans and the Greeks before them, medieval pie-makers saw the pastry as a kind of makeshift casserole dish, which was generally thrown away after the contents were devoured.

The pie arrived in Australia with the first colonists. Pies were on the menu of Sydney’s first official banquet held to celebrate the King’s birthday in June 1788, although what they contained is not recorded. 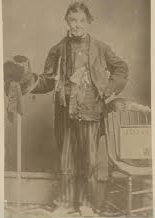 In the early 19th century, the streets of our cities rang with the cries of roving pie sellers. Local wits speculated about the contents of their wares, noting the disappearance of neighbourhood cats. Hygiene was dubious – sellers would pierce the top of each pie with a thumb, topping up the contents from a jug of “gravy” which was most likely just salty water. In Sydney in the 1840s, one pie seller, William King, became famous as the “flying pieman“. His bizarre obsession was performing amazing feats of “pedestrianism”. In one instance, he was seen to sell pies to passengers boarding the steamer for Parramatta, and then run 18 miles to offer the remaining pies to the same passengers as they disembarked at their destination.

From the mid-1850s, pies became a staple of the refreshment rooms that sprang up to cater for passengers on the expanding railway network. Horse-drawn pie carts became fixtures on Adelaide streets and around the 1890s that South Australian specialty, the pie floater appeared. The upside-down pie floating in a puddle of pea soup continues to fascinate or perhaps horrify those who haven’t grown up with the concept. 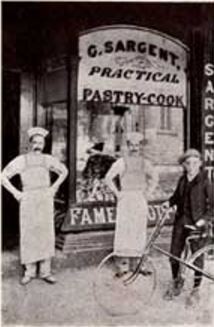 Local bakeries and pastry shops also had their specialties. In fact, one of our largest modern brands, Sargents, got its start in 1891 when George and Charlotte Sargent opened their shop in Paddington, selling pies for a penny each. Thirty-seven years later, Sargents Pies were among the delicacies provided for the public at the opening of Australia’s first parliament house in Canberra. Sadly, the caterers had been over-optimistic about the size of the crowd and 10,000 pies went to an unmarked grave – some say at the Queanbeyan tip, others the site where the Australian Treasury building now stands. So our economy could truly be founded on pies.

It was in the early 20th century that the long association of pies with Aussie Rules football began. Pea and pie nights are a tradition in Yorkshire, often associated with fund-raising activities and social clubs. Perhaps that was the origin of the football club pie night. Melbourne’s Footscray Football Club seems to have been a pioneer of the event, with a local paper reporting in 1921 that: “On May 5 (the last Thursday before the pennant games commence) Mr. D. Mitchell, president of the Footscray Football Club, will entertain the committee and players at the pavilion, Western Reserve. The function will take the form of a pie night.”

It seems these were fairly decorous affairs, however. A follow-up report says that “a fine musical programme was provided by Mr C. Newbould and party. The evening was very much enjoyed by all”.  Contemporary accounts suggest that pie nights in the 1920s involved coffee, music, lectures and card tricks, rather than large quantities of beer.

A 1928 report of the Eltham Football Club pie night hints at competitive pie-eating though:

Last Thursday night was “pie night” at the training rooms. The “eats” were provided by Mr. Dorfler, our pastrycook, and he also included coffee to wash down the tempting pastry. Good eating records were attained, and the “pie eaters of Eltham” bid fair to become as famous as the Beefeaters of Old England. Pie nights are still popular, and gastronomy now plays an important part in the training of our footballers.

In 1931 the Williamstown Chronicle was more explicit, in recounting a night at the Newport Football Club, at which “the ladies’ committee was also present”.

Then came the great event of the night, which was the pie-eating contest. Butcher and Drongo were favorites, but as the night wore on it was noted that they would have to look to their laurels. One big chap, who arrived on a fire engine, consumed six pies rapidly and bawled for more. Greeney, a young blushing lad, was running him pretty close. The Rajah of Lake Tyers was disqualified for using a knife and fork. The final showed a win for Butcher who polished off 11 pies and Drongo a close second with 10.

Pie-eating competitions can be dangerous though, even today. In July 2013 a North Queensland man died during one such contest while watching a State of Origin rugby league game in his local pub. Apparently, his final words were “Jeez, this chilli pie is hot”.  The story was widely reported both at home and even in the UK. The Telegraph in London got the accompanying picture wrong though, showing a pie in a ceramic dish. Don’t they know that the Aussie Pie is always hand-held? 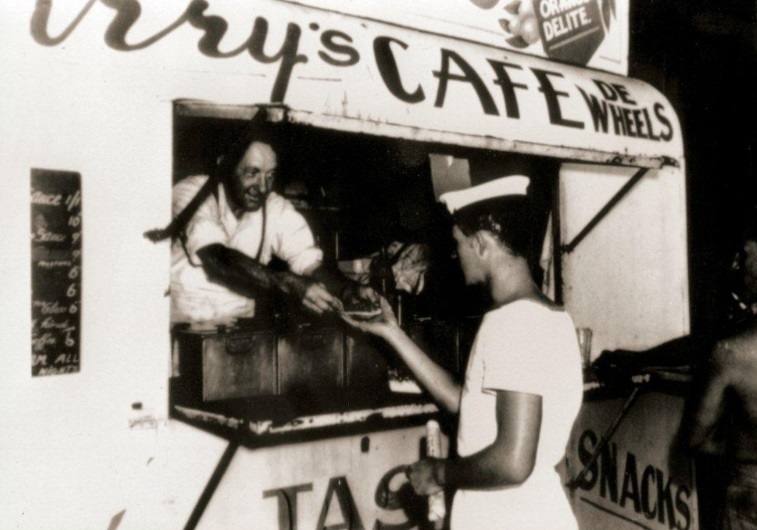 The great Australian pie has been for many years a favoured late-night snack. Until a few years ago, Adelaide’s pie carts dispensed them through the wee hours. When an unsympathetic council refused to renew the last cart’s trading license a couple of 24-hour bakeries stepped up, providing 24-hour a day pie floaters to the bereft populace. In Sydney, Harry’s Café de Wheels, founded in the late 1930s, continues to attract a late-night crowd, although as Woolloomooloo has become gentrified the prostitutes and sailors have no doubt been replaced by Smart Young Things. 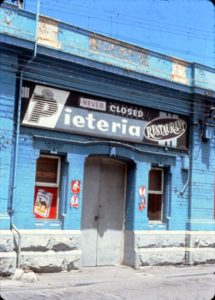 In Melbourne, John ‘Pop’ Pomeroy ran a famous all-night pie stall on Princes Bridge from 1936 until shortly before his death in 1950. After Pop’s death, the all-night pie trade moved to the infamous Pieteria, in “Banana Alley” under the railway viaduct at the top of Flinders Street. It was a place you rarely visited when you were sober, which may be why the Faculty of Architecture from the University of Melbourne voted it the city’s best all-night pavement café in 1965.  Then again, it may have been the only late-night café. Sadly, the Pieteria eventually did close and the location is now home to beefy blokes pumping iron at a 24-hour gym.

Melbourne, of course, is home to the iconic Four ‘n Twenty pie which, but for JoyceGriffin of Bendigo, could have been called the Dad and Dave pie. That was its original moniker when local lad Frank McClure was first peddling it around the Bendigo milk bars in 1945. Joyce says she suggested the name Four ‘n Twenty and the rest is history. The factory later moved to the Melbourne Showgrounds, then to a new factory that could churn out 12,000 pies an hour. A giant pie still soars over the Showgrounds. Erected in 1977, it was heritage listed in 1999.

Oddly, the meat-filled, hand-held pie now seems almost unique to Australia and New Zealand. In America, it’s unknown and the term “pie” refers to a sweet dish, usually filled with fruit. In the UK, it’s likely to be a pork pie with a completely different kind of crust and mostly served cold, or to come in a dish with mashed potato on the side.

While the classic Australian pie is just pastry, meat and gravy, in New Zealand these ingredients are often supplemented by cheese.  The steak and cheese pie warrants its own category in their official pie awards. Encountering a puddle of molten cheese at first bite would surely add a new degree of difficulty to the already-tricky feat of consuming a pie without dribbling the contents down the front of your clothes.

The extra heat engendered by melted cheese may have been behind a Kiwi policeman’s warning to a suspicious character encountered wandering the streets late at night. A television crew, riding along on the night-time patrol, recorded the lurker’s assertion that he was just going to the petrol station to buy a pie.  The cop’s reply subsequently went viral:

‘Three o’clock in the morning, that pie has probably been in the warming drawer for about 12 hours. It will be thermo-nuclear – always blow on the pie. Safer communities together,’ he said, quoting the New Zealand Police slogan. As a result, New Zealanders now constantly remind each other to “always blow on the pie”.  Given that they eat more pies than Australians (an average 15 a year each compared to our 12) that policeman may have saved a whole generation from serious injury – a proud legacy indeed.