Footy food
From pies and hot dogs to salads and sushi

For decades, footy food mainly meant pies. In Victoria, it was a relationship assiduously fostered by the state’s best-selling brand, Four ‘n Twenty. Advertisements featured Aussie rules footballers singing along to a rousing jingle: “Oh what a lovely pie me boys, a Four ‘n Twenty pie…”

However, the relationship preceded Four ‘n Twenty’s invention in 1947. As early as the 1920s, pie nights were regular social events at local football clubs and in the 1930s newspapers confirm the sale of pies at the MCG.  The food facilities at the “G” weren’t very salubrious at that time, however, and complaints were made “that food had been sold in close proximity to sanitary conveniences.” Health inspectors found a pie stall under the Wardell stand was subject to unsavoury odours from the nearby toilets. They also recommended the removal of itinerant saveloy and roll vendors standing “close to the conveniences”.

Things hadn’t improved much by 1951, according to a visitor to the Australia v West Indies cricket test.  In a letter to The Age, Counsellor W. S. James, J.P. of Shepparton complained that “the vast majority of spectators had to put up with abominable unhygienic conditions in food service.” He went on to describe the melée taking place below the grandstand.

In the passageway below the stand thousands were to be seen savagely milling and jostling in a disorderly crush, trying to get to a sandwich counter or a pie stall.

At one stall food, handled by fingers (not the cleanest) was passed from hand to hand between and over the heads of the milling crowd, coughing, smoking and breathing on it in a manner that caused some who were trying to extricate themselves to say “Absolutely disgusting and nauseating…”

By the 1980s, as we all got more health-conscious, footy-goers began to ask for something more than pies, pasties, hot dogs and chips. “Surely a caterer could be found that could supply such things as salad rolls, vegetable pies or at least wholemeal bread with a (shudder) hot dog,” wrote a disgruntled fan in 1983.

Bring on the Bratwurst

It took a while for the stadium proprietors to respond, but by 1991 some small changes had been made to the footy food menus. By then, the VFL had gone national with teams in Sydney, Perth, Brisbane and Adelaide and had renamed itself the AFL. In Melbourne, though, many of the teams still played at their traditional home grounds including Windy Hill (Essendon), the Western Oval (Footscray) and Princes Park (Carlton).

Reviewing the catering at Princes Park for The Age’s Epicure page in 1991, the “Coodabeen Champions” Academic Think Tank decided that, despite the changes, there was nothing “Nouvelle” about “Outer Cuisine”. Most of the offerings they sampled were traditional. There were chips, “moist, cooked al dente, sufficiently pliable to be draped over the rim of their colourful cardboard bucket”. There were hot dogs, and pies “marinated in a rich double tomato sauce”.

But there were also “gourmet sausages” – bratwurst sausage with a green pickle toothpicked on top and surrounded by tomato sauce, mustard, English-style brown sauce, rings of boiled onion and “a mound of some exotic beany substance”. Also on offer were jam-filled donuts and frozen-in-the-middle spring rolls.  It was all served in rather grim decor, described by the Coodabeens as “Soviet Brutalist” in style. They must have missed the Kentucky Fried store which was operating at Princes Park by then.

The article was accompanied by a footy food ladder that also referred to the hot potatoes available at Waverley (formerly VFL Park) and the dim sims at the Western Oval. 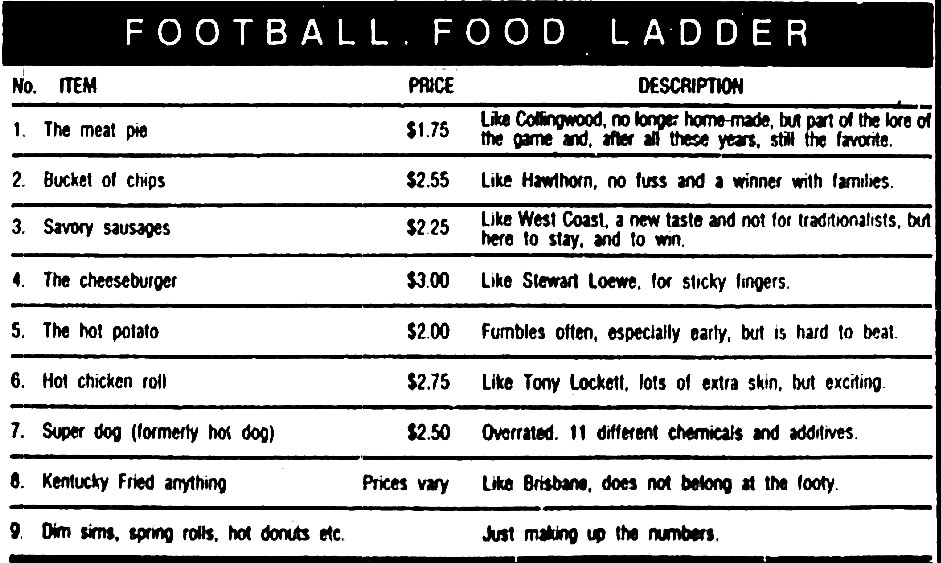 By 1997, according to The Age, Princes Park (by then called Optus Oval) had lifted its game slightly, expanding its range of sausages to include chicken teriyaki versions and offering salad rolls and salad-topped hot dogs. The Sydney Cricket Ground, deemed to have a more up-market crowd, had a stall serving curries, salads and various health foods.

At this time, a unique feature of food at the MCG was the sauce dispensers in the Southern Stand. They were described by Stephen Downes as cow-sized and cow-shaped, with four oversized teats dispensing tomato sauce, mustard or vinegar. Downes felt that some customers spent an unduly long time squeezing the teats. I can’t find a picture of the MCG cows, which he said were painted sky blue, but can only conclude they looked something like this: 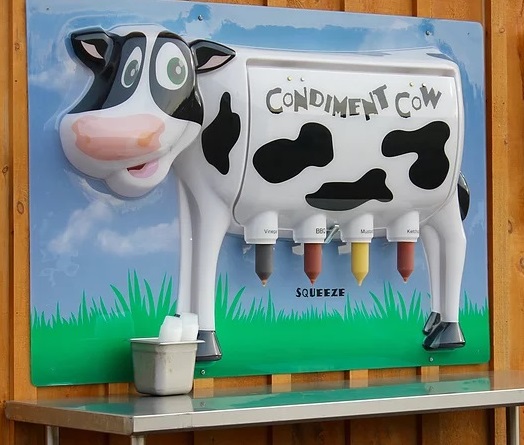 Jump forward a couple of decades and everything has changed. At the MCG punters are provided with a wide range of choices from cafes, bars, food counters and food trucks. The Food Store, with multiple locations around the ground, still has the basics – pies, hot chips and hot dogs – but can also do you a salad, a sandwich or even sushi. The Members reserve, as you’d expect, has even more variety including chicken souvlaki and chicken burritos, while the 2019 season saw the introduction of butter chicken and lamb saagwala, served with rice, raita, mango chutney and naan bread, for $14 apiece.

Over at Marvel Stadium, you can pick up BBQ beef brisket with apple and celery slaw, a pulled pork Cuban sandwich, or mac and cheese Croquettes. And their Studio Restaurant has a full menu of pub-style food.

Back in the early 1990s, your choice of beverage at the footy was beer or beer – in a blue can or a green can. Today, while mid-strength beer is all they serve at most of the MCG bars, Marvel brags of “a selection of Australian classic and international premium beers, cider, ready to drink spirits (Bourbon, Scotch, Vodka and Rum) and premium red, white and sparkling wine”.

Sushi at the football? The 1930s greats would be turning in their graves. But in these food-conscious times, even footy grounds feel called upon to provide greater variety and more salubrious surroundings. It’s probably fair to say, though, that despite the fancier offerings footy food still mostly means burning your mouth on the filling of a hot pie while yelling support for your team or abuse at the umpire. It’s just part of the game.