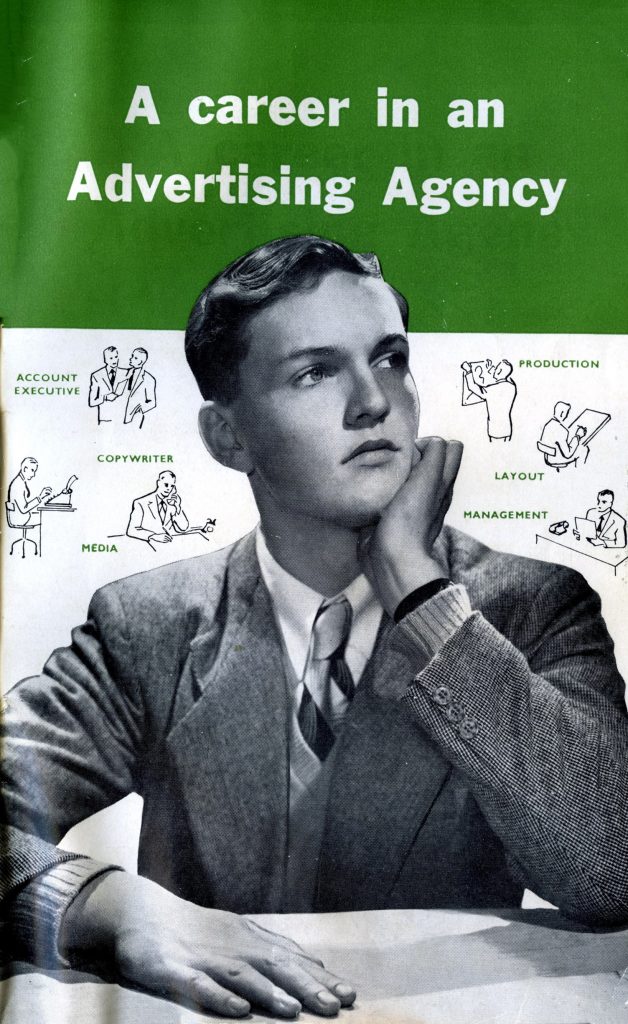 “Don’t let your daughter go into advertising,” a distant relative warned my father. Uncle George was himself the proprietor of an advertising agency and in a splendid position to know about what went on in the business. Neither I nor my father took his warning to heart. So, as a relatively innocent almost-18-year old, I took a job in an advertising agency.

It was something I had been working towards since Year 10, when the school held a careers night. I wanted to be a writer and had considered journalism, but heard that women were generally relegated to the social pages. It was 1963, after all. So when I heard about advertising I changed course. That must have been when I received this informative brochure which, strangely enough, did not put me off the whole idea.

I don’t know who wrote it, but it was clearly a man. In the introduction, he asks: Are you the sort of boy who is looking for a job needing imagination, which will take you far beyond the humdrum routine of most other businesses?  To be fair, there is a section (on page 21) headed Opportunities for Girls. In somewhat grudging fashion, the writer points out that:

The specialist advertising occupations listed in this booklet are, of course, open to girls just as much as to boys. So many advertised products are bought by housewives rather than men that the advertising of such products is often better for the feminine touch. Advertising has many vacancies for women- copywriters particularly. It is hard sometimes to break into this field without experience, but advertising agencies require typists, secretaries, clerks, telephone operators, receptionists…

I duly learned to type and my first job was on the switchboard. 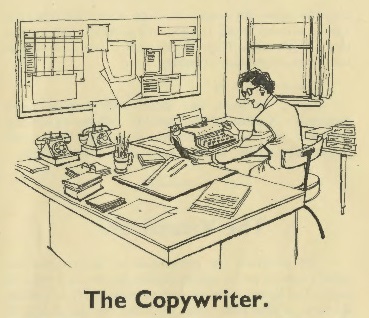 The booklet describes each department of an advertising agency in detail. It was clearly produced before 1956, since a separate, loose page had to be inserted for The Television Department. In the last few years television has become a most important and challenging advertising medium in Australia, it declared. Before that, though, radio was the glamour medium, with some agencies having a separate Radio Department. They had one at John Clemenger Pty Ltd (now Clemenger BBDO) and I spent two years there, making the transition from secretary to writer.

Before that, though, I spent a year (also as a secretary) in Mechanical Production. The booklet explains that in newspapers: The words are printed from metal type, and the illustrations from engraving plates which are called “blocks”. Advertising agencies usually supply advertisements to the papers in ready-to-use form, that is complete with type and blocks. Yes indeed. Part of my job was to arrange the dispatch of large lumps of metal attached to blocks of wood. These were known as mounted stereos and were sent to a variety of magazines around the country. When it came to newspapers, though, technology had moved on. We sent them ‘mats’, otherwise known as flong. These were papier-mâché moulds from which the newspaper would cast the metal printing plates.

Significantly, the booklet makes no reference to “the creative department” and the position of Creative Director seemed not to exist. Instead, there was the Copy Department, headed by the Copy Chief, and the Art Department headed by the Art Director. His role was to act  …as a kind of stage producer. First, with the help of his visualisers, he creates the basic layout of the advertisement; then he calls on his finished artists to carry the work through to its completion. As for the artists themselves, their role was to “add picture interest to a piece of copy”. It was a different world back then. 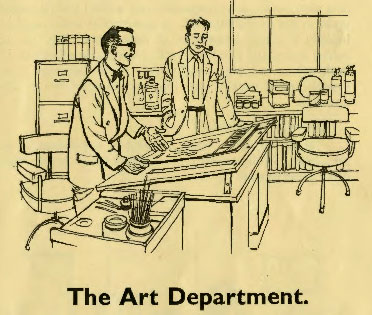 Fortunately, by the time I became a full-time copywriter in 1969, the idea of the creative team had emerged, the visualisers had become art directors and the days of sliding a piece of copy under the artist’s door for some “picture interest” to be added were long gone. And television (though still in black and white) had become the primary advertising medium for many clients.

More women were sneaking into the business in professional roles, although at Clemenger we had to fight to be permitted to join the company’s superannuation scheme. And it took many years before we saw a female account executive.

According to the National Library of Australia, the first document ever printed in Australia, in 1796, was an advertisement  – for a theatre show. Now, television advertising is being seen as yesterday’s medium and it’s all about digital.  This booklet is a snapshot of the industry in a gentler age, when one of the requirements for a ‘commercial artist’ was the ability to draw. It’s worth a download.

A Career in an Advertising Agency (PDF) 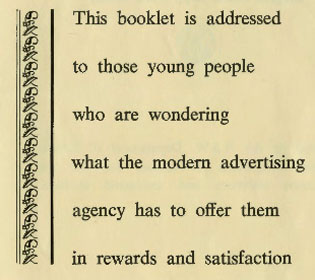