Easy to get a lawn with
Where's the pun in that?

There is a town or, as it is now styled in deference to its tourist potential, a village just outside Canberra by the name of Bungendore.  It is inhabited by urban refugees, Aussie battlers and people with cow-shit on their boots.  It’s a particularly pleasant place to drive to at the end of a day in advertising – especially in summer.  Around 7.30 the light falls low and golden through the gums, the cows are belly-deep in drying grass and the main hazard on the road that winds through the hills is the occasional driver in a hat.

What strikes you, as you glide (or, if you’re driving the ancient Mitsubishi) chug through this landscape is this.  Advertising is not very important.  The cows don’t care about advertising.  The driver in the hat probably doesn’t give much thought to advertising.  Advertising will not make it rain, or avert the sudden storm that rips ancient trees out of the ground and plunges the town into darkness for most of a long winter’s night.

And yet, even here, advertising impinges.  Along the roadside as you approach Bungendore is a series of signs promoting the product of one of the town’s major industries.  (Perhaps its only major industry.)  Canturf grow grass – that roll-up kind that you lay like a carpet when you don’t have the proper country-bred patience to wait for things to grow in their own good time.

When we first arrived in Bungendore, the signs were mildly witty and nicely designed.  “Trespassers will be impressed” one sign proclaimed, in a pleasant and readable typeface .  Followed by a well designed logo that identified Canturf instant lawn.  We smiled a bit and thought “nice line.” 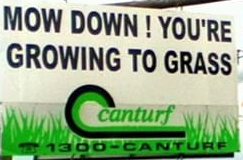 Suddenly, on the drive to Bungendore, advertising is important through its very awfulness.  My previously benign attitude towards one of the town’s major employers has shifted.

So what’s my point?    People don’t really want advertising.  They certainly aren’t hanging out for it.  No matter that it pays for the television they watch and the newspapers and magazines they read.  No matter that it makes it possible to put an infinite variety of products on their supermarket shelves.

But since you can’t get away from it, even in the country, hadn’t it better be good?  Thoughtful, intriguing, well-crafted, truthful?  Not crass, ugly, aggressive or just plain naff.  I suppose that’s where the wizards of this book come in.  If only we, in Canberra, had more of them – or the money to use them.

But that’s another story.

This piece was written in 1998 a couple of years after I started working at an ad agency in Canberra. It appeared in a book called Wizards of Oz – an annual directory of freelance creative people. The Canturf signs these days look slicker – but some of the puns are still pretty dubious.