Yum, Brussels sprouts. I never thought I’d see the day when a child of mine uttered these words. And yet it has come to pass.

When I was a child, Brussels sprouts were one of the few foods I wasn’t made to eat.  It probably had something to do with the gag reaction that followed the smallest mouthful. No doubt envisaging distinctly unappetising consequences, my mother wisely decided that the “eat what’s put in front of you” rule could be waived in this case. My other pet hate was that old Aussie stalwart, beetroot. More specifically, tinned beetroot of the kind that accompanied every summer cold collation, spreading its shocking pink stain over every other ingredient on your plate. Salad sandwiches from the tuckshop always came with the regulation vinegary beetroot slice.  Even if you picked it out, the flavour was remarkably persistent. 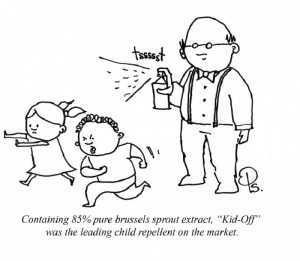 These days, I’ll happily eat both beetroot and Brussels sprouts, especially when I cook them myself. I can get positively enthusiastic about Turkish beetroot dip. Baby beets from our own garden, gently steamed and served with butter are an extremely acceptable vegetable accompaniment. In fact, it’s difficult to think of anything I won’t eat, although there are some foods I wouldn’t actually choose (processed cheddar cheese for example, or pizza with pineapple – don’t get me started!).

It seems that many people share my early aversions and many hold onto them even unto adulthood.  Brussels sprouts rate very high on the “most hated” list, and not just in Australia. According to a survey in 2002, Brussels sprouts are Britain’s most hated vegetable. And an online forum with mainly US contributors also gave sprouts the big thumbs down. Guess what the other most-mentioned vegetable was?  Yup, beets.

In the meat department, there seems to be pretty universal hatred (at least in Anglo-Saxon societies) for offal, in particular liver.  Now I couldn’t say that lambs fry was ever my absolute favourite but, when I saw it on a restaurant menu recently, I was tempted. As a child, I had no problem with kidneys or brains, either. My mother’s brain and walnut sandwiches were a party favourite.  Mention them to most people today and they turn slightly green and walk quickly away.

None of us was ever made to eat tripe. I think I would probably still have difficulty with my mother’s tripe and parsley sauce. When that very distinctive aroma filled the kitchen, all the children in the family happily settled for eggs on toast.  Call it ‘trippa alla Fiorentina’ though, and cook it with a flavoursome tomato sauce and I’m happy to eat it, although perhaps I wouldn’t line up for seconds.

Of course, it’s all in the cooking.  My husband grew up in Northern Victoria and discovered how beautifully Europeans cooked liver when he visited a café run by a family who had come out to work on the Snowy Mountains Scheme. Insensitive teenager that he was, he rushed home to confront his mother with her culinary failings, thereby reducing her to tears.

The same unfortunate woman’s predilection for tuna casseroles (recipe – take white sauce and add any combination of tinned tuna, tinned asparagus, tinned corn kernels, frozen peas and cheddar cheese) has left my husband with one abiding food hate.  He refuses to touch any kind of tinned fish and no amount of coaxing will get ‘vitello tonnato’ down his throat.

It begins with the breast

Recent research into how children develop taste preferences indicates that there are genetic factors that influence preferences for sweet food and sensitivity to bitter tastes, like sprouts.  However, the same researchers have found that, as people get older, they tend to become more tolerant of a wider range of tastes.

Scientists have also found that tastes children experience during their first few months of life have a strong influence on their later taste preferences.  It seems that, if you want your children to grow up eating a wide range of foods, one of the best things you can do is breast feed.  The flavours of the food mum eats are transferred to the breast milk, which probably explains why some children seem to have a natural affinity for curry, olives, anchovies and other strong flavours at a very early age.

I can’t specifically remember eating Brussels sprouts while breast-feeding my daughter.  And she has been through picky stages over the last 21 years.  However, as I see her hoeing into a second helping of those aromatic little cabbages, I can’t help thinking I must have done something right!