The red, the learned and the fat – Bologna has many epithets. Red, because of the glowing red brick of its mediaeval buildings, but also because of the city’s history as a stronghold of the Italian Communist Party. Learned, because Bologna’s university is the oldest in Europe, boasting Dante, Petrarch and Boccaccio among its past students. And fat, because Bologna is famous for its food. The capital of the region producing parmigiano, prosciutto di Parma, mortadella and balsamic vinegar, it’s also the home of ragù bolognese (the authentic meat sauce that has been bastardised into our Australian spag bol).

Since our train journey from Venice to Umbria would take us through Bologna, we decided on a two-night stopover. I confess it was the “la grassa” part that attracted us most, but there’s plenty more to love. The elegant colonnaded streets owe their existence to statutes passed in 1288, decreeing that all new houses must have a portico high enough for a man on his horse to pass beneath. Few are now supported by the original wooden beams, although there are still some examples dating back to the 1300s. 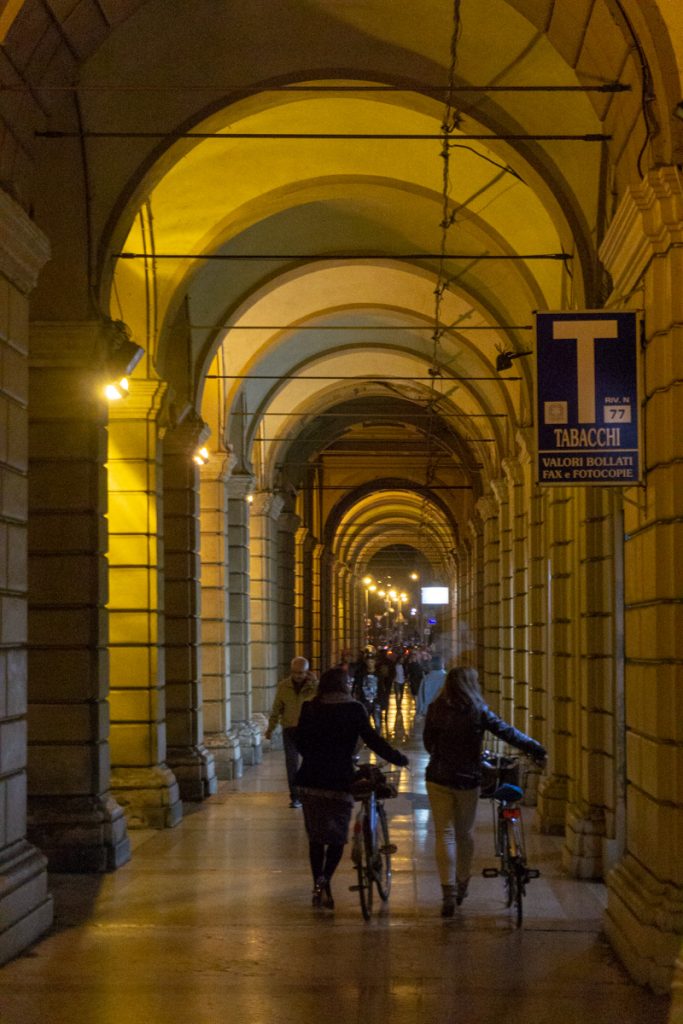 Our hotel in Bologna was named after the porticos – Hotel I Portici.  It promised “a refined and suggestive atmosphere, providing guests with a new experience, full of discovery and charm, involving all five senses.”  Hmmm.  It was nice. Not spectacular. But nice. The kind of hotel that appeals to conference groups – not too expensive, but with a bar, a choice of restaurants and 24-hour reception.  The drug company Roche was hosting an Italian junket for a group we, probably unjustifiably, judged from their cardigans and thick glasses to be a group of German pharmacists, who monopolised the terrace and booked out the bistro.

We, however, had pre-booked dinner at the hotel’s Michelin-starred restaurant – the biggest extravagance of our trip. The Eden Theatre, decorated in Belle Epoque style, was the setting for a degustation titled “Wandering Through Emiglia”. The surroundings were elegant, the tables widely spaced, the service impeccable and the food beautifully worked and presented. But, somehow, it was a disappointment. Although the menu was based on local food traditions, with a centrepiece of the distinctive Mora Romagnola pork, no one dish stood out. It was the kind of meal you could find in a fine diner anywhere in the world and, for that reason, non-memorable. The following night’s traditional tagliatelle al ragù in the bistro was, strangely, more satisfying. 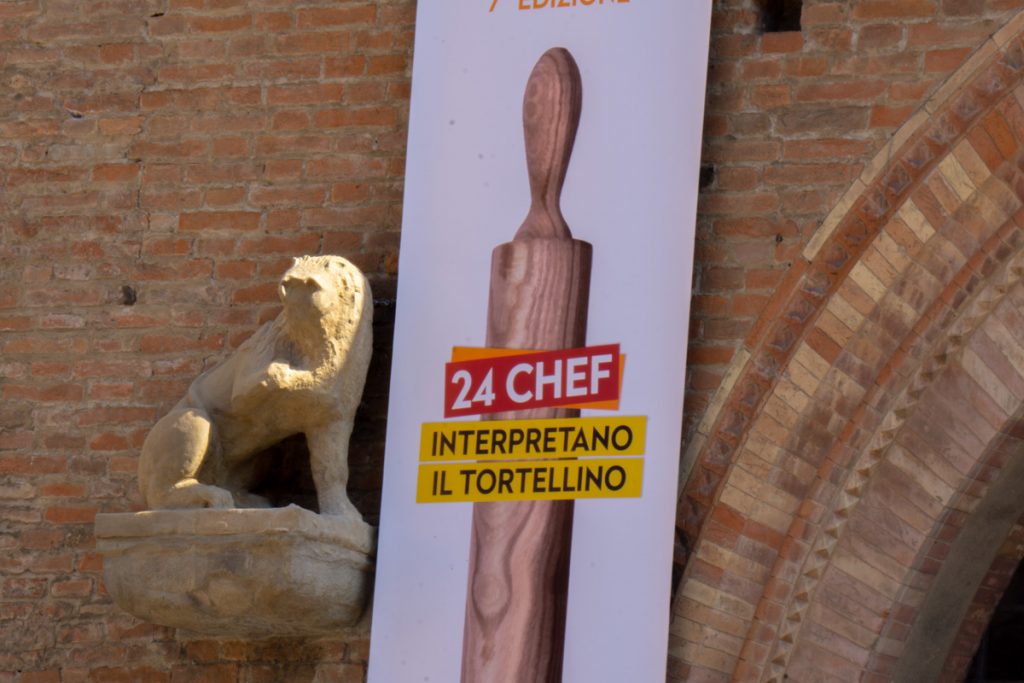 The other distinctive pasta dish of Bologna is, of course, tortellini. So it was serendipitous that we were there for the Festival del Tortellino. It was a holiday in the city: the feast of Saint Petronius, a 5th-century bishop who is Bologna’s patron saint. The main streets around the historic centre were closed to traffic and thronged with people out for a good time. The festival took place in the Palazzo Re Enzo, built between 1244 and 1246 and prison, from 1249 to 1272, to Enzo, king of Sardinia. Poor old Enzo made the mistake of supporting his father, Emperor Frederick II, against the papal forces and after his defeat in battle was put away for the rest of his life. He was obviously permitted visitors though. During that time he managed to sire three daughters and, arguably, a son. 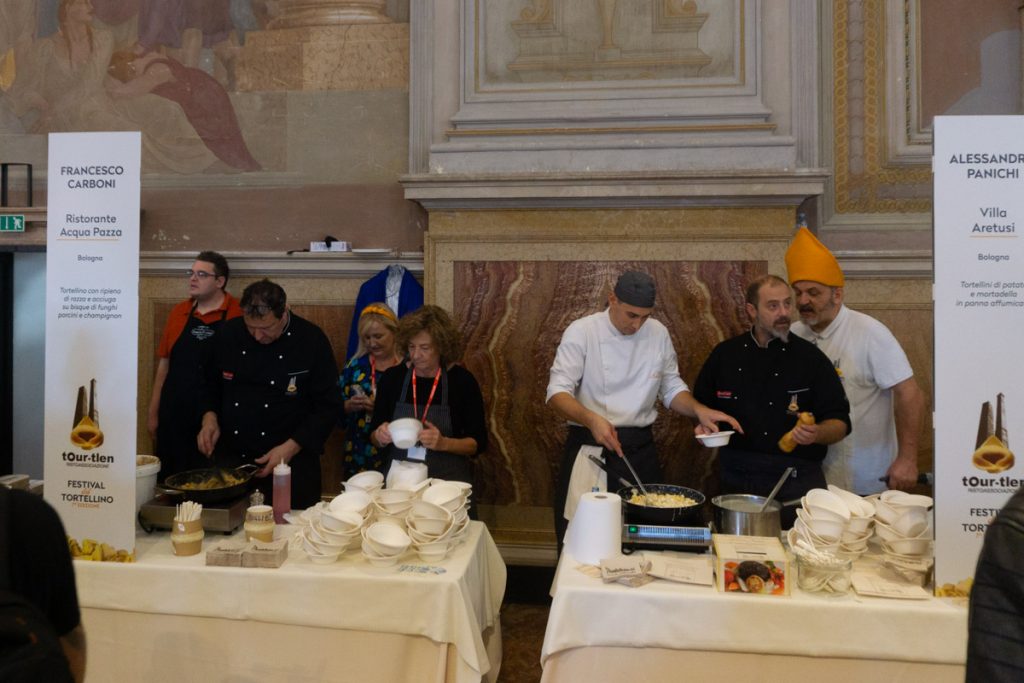 So there we were, nearly 750 years after Enzo passed away, cheek by jowl with a few hundred Bolognesi intent on sampling some of the 24 different varieties of tortellini prepared by 24 different chefs from 24 different restaurants. There were the classics: tortellini in brodo (in broth) and tortellini alla panna (in cream). Plus tortellini with seafood, tortellini with chilli, vegetarian tortellini – limiting ourselves to six different tastings was difficult. Local wine-makers manned booths dispensing their wares and, on a side table, a large, smiling man was enthusiastically slicing another of the local specialties: mortadella. It was crowded, it was noisy, it was hot – but it was joyous. After all that we needed a sit-down and a glass of wine under the portico. 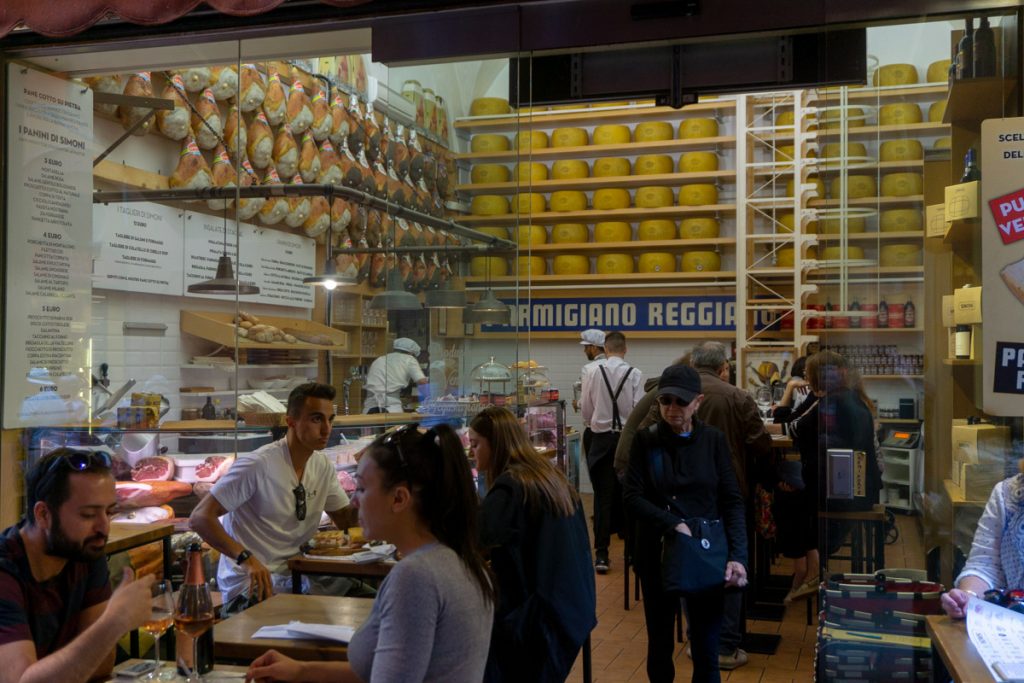 This led, after a decent interval, to a wander through the old market area just off Piazza Maggiore, known as the Quadrilatero. There are small shops and café tables, mind-boggling displays of hams, salami, cheeses, fish, fruit and veg, bread, cakes – every possible variety of edible substance. Bologna la grassa indeed. Then, emerging from the warren of narrow streets, we were faced with another of the city’s landmarks: the two towers. 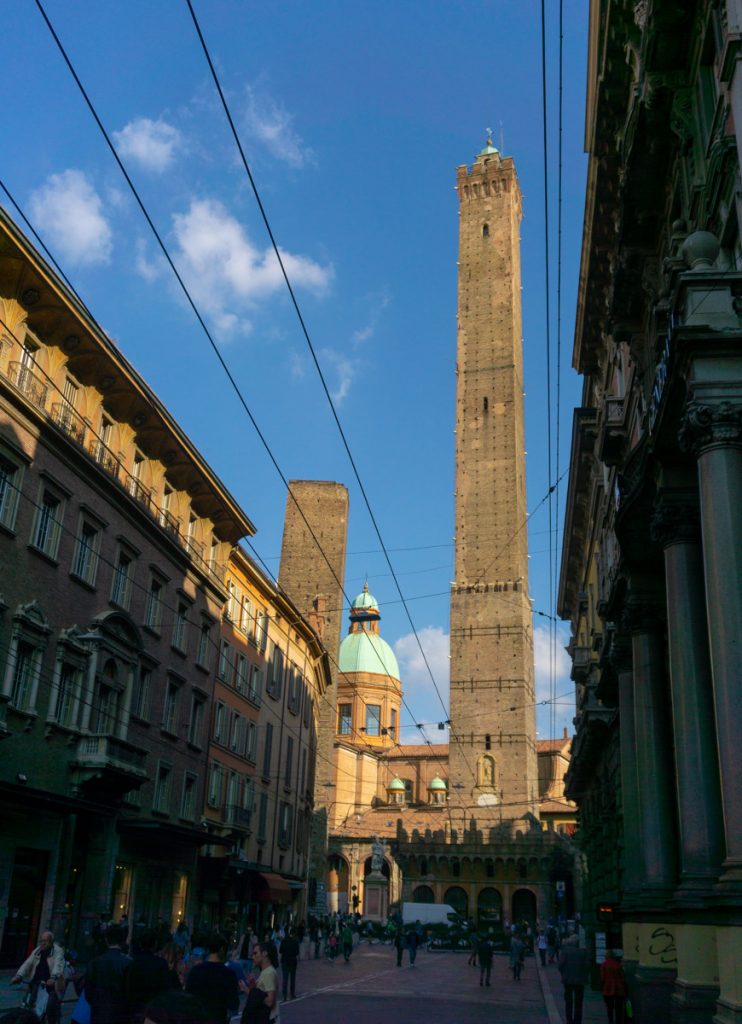 In the 1200s the powerful Bolognesi clans, like others in central and northern Italy, went in for competitive tower building. The motive was partly protection, but mostly it was just showing off. The higher the tower, the more influential the clan appeared to be. The Asinelli clan in Bologna were clearly determined to assert themselves, building a brick tower that reaches 97.2 metres into the sky. It definitely overshadows the next-door Torre della Garisenda which is a mere 48.16 metres tall. (This one was once taller, but the alarming lean it developed led them to lop a bit off the top in the 1300s.) You can climb the Torre degli Asinelli if you’re up for 500 or so steps. We weren’t. It seems there were around 100 towers in Bologna at one time, although only 21 remain.

Another Bologna attraction we passed on was the shopping. The colonnaded streets are lined with smart stores which would surely attract the fashion-addicted. Personally, I find shopping the best way to ruin a good holiday, so contented myself with a few longing gazes at the handbags, shoes, jewellery and stylish clothing. There’s a sophistication about Bologna that you don’t feel in Venice, perhaps because the ratio of residents to tourists is completely different. It’s a fine, old European city – cultured, lively and with a rich history.

And of course, there’s that all-important promise – “a Bologna si mangia bene”.

See more pictures in the Bologna section from our photo book on Issuu. Just click on the image below.