How not to buy a cooking appliance

A year or so ago, we bought a new stove. Not an under-bench oven and cook top, but a freestanding stove. It was the only option when we switched from bottled gas to natural gas and our antique stove was deemed unfit for conversion. Of course, we could have remodelled the whole kitchen to accommodate built-in appliances, but we like the way it is now. Far simpler, we thought, just to replace our old upright model with a new one.

Foolish dreams! Our old Chef had a discreet, mostly glass front that didn’t dominate the room. This was important, since we live in our old farmhouse kitchen, with its open fire, comfy chairs, old oak dresser and pine table. However, all the new Chefs turned out to be gleaming monsters with vast amounts of white enamel. The less conspicuous brown-fronted and stainless steel models, it emerged, were no longer in production.

Then we spotted the European alternative – a neat stainless steel stove that would fit perfectly into the allocated space. Moreover, that week at Hardly Normal, it came as a package with a range hood at a vastly reduced cost, meaning that the stove itself cost just a few hundred dollars more than the aggressively gleaming Chef.  And we could have it interest and payment-free for a year!

The deal was quickly done and the stove installed. It was only as we began to use our glamorous new cooker that we realised the import of the old saying “caveat emptor” – let the buyer beware. While it looked just fine, there were certain things our new appliance wouldn’t do.

Grilling, for a start, was out. While the old Aussie Chef had a separate grilling compartment, the imported stove had its grill in the oven. It turns out Europeans aren’t big on grilling – whether this is the cause or the effect of appliances like ours is unclear. Try grilling a chop or two and the fat splatter causes the oven to fill with dense smoke.  What’s more, the oven seems to have no exhaust, so the smoke builds up inside, making opening the door a choking and blinding experience.

A solution was quickly found. It was back to the appliance store where, for just a couple of hundred dollars, we acquired a neat little Weber Q barbecue, complete with gas bottle. Positioned outside the kitchen door, it had the added virtue of keeping fish smells, meat smells and various other undesirable cooking smells, out of the house. Of course, it was dark out there at night, so it was off to the hardware store and a hundred dollars later we had a motion sensitive, solar powered light.

That was the grilling problem solved. Well, not quite. Then there was toast. On occasions, you need more than two slices of toast at a time – for example, if you’re serving scrambled eggs to two or more people. Even on the highest setting and with the tray as high as possible in the oven, bread stubbornly refused to brown in less than 15 minutes. 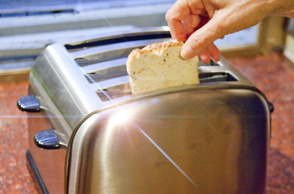 Ha! Back to the appliance store again, to find a four-slice toaster. This time, a mere eighty dollars did the trick, or so we thought. The giant, stainless steel model not only took up approximately half the available bench space in our, admittedly primitive, kitchen. It also wouldn’t switch on. Or, at least, it would switch on if there was no bread in it, but pop in a slice or two and it would immediately pop them right back up again. Fortunately the toaster was brand new and under warranty, so another trip to the appliance store secured a replacement which, to our immense relief, works a treat.

The recalcitrant toaster came hard on the heels of another rogue appliance. Our faithful Breville Kitchen Wizz having given up the ghost after thirty years of service, we shouted ourselves a replacement. In this case we had the opposite problem – as long as the power was connected, it refused to turn off!

This time we opted for a cash refund and decided that the year’s appliance budget had well and truly reached its limit. Then the hot water service exploded…